How to Fix the Economy 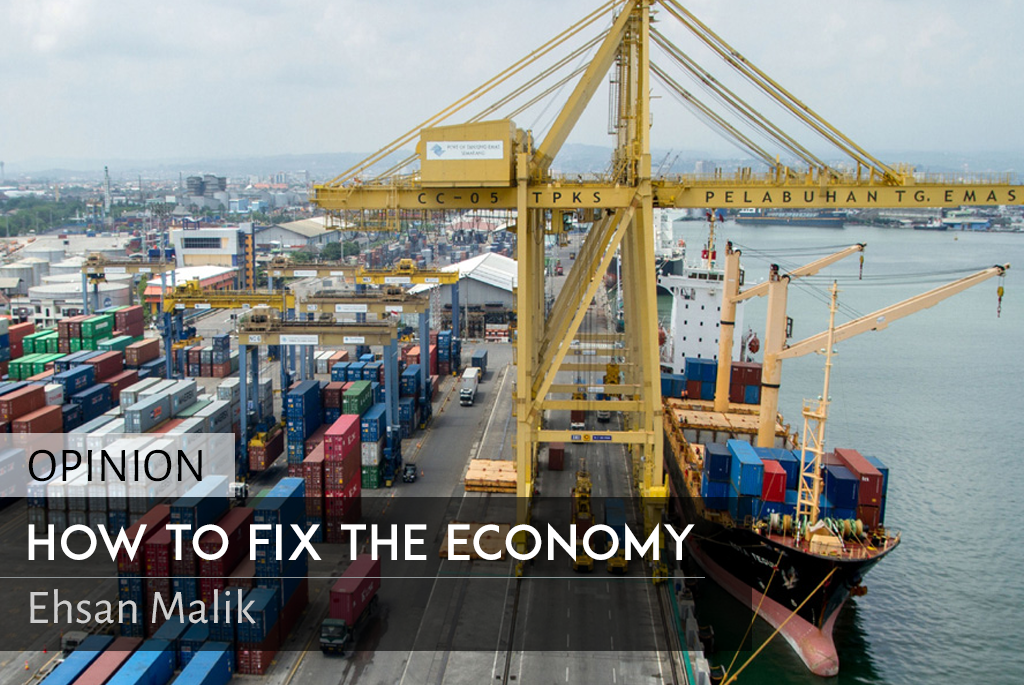 The biggest challenge for an incoming government two months from now will be how to stabilise the economy. Foreign exchange cover, currently representing two months of imports, would have been maintained at that precarious level by the caretaker government. Since the caretaker government cannot commit to an IMF programme, it would have continued to tap short term commercial loans, amongst others from Chinese banks. With imports continuing to outpace exports and remittances that are flat, the dilemma facing the new government would be to manage within the short tenor borrowing of its predecessors.

The timing of this challenge for an incoming government is unfortunate. However, it can take some solace in (and should draw lessons from) the fact that eight successive governments in the past 30 years have also suffered from recurring cycles of pressure on the external account. As a consequence, Pakistan has been to the IMF on twelve different occasions. There is a fundamental flaw in the economy that has not been fixed. The new government should resolve to do so. Pakistan has become a nation of traders, happy to import goods and export jobs, notwithstanding a growing youth cohort seeking employment. Today, consumption represents 80 percent of GDP and the investment rate is half that of our South Asian neighbours, as is the rate of growth of manufacturing.

Successive governments have indulged in temporary fixes which at best amount to first aid, when the country’s economy needs drastic surgery. The new government will have to do both. Manage the short term. Buy time and space for the long term.

For the short term, an incoming government can continue to rely on the “beggar bowl” approach of knocking on doors that may assist. However, there is no free lunch. Those who help, do so for their commercial interests, not necessarily ours. China is the source of the largest assistance. It is also the source of Pakistan’s largest trade deficit – over US$ 15 Billion per annum or US$1.25 Billion a month. Short term loans from China help sustain exports from and jobs in China. It could be more helpful if it granted Pakistan parity with ASEAN on imports and relocated labour-intensive manufacturing to Pakistan, this would help stem the trade deficit.

One alternative to the “beggar bowl” approach is an IMF programme. With strict discipline on fiscal management, this may be a hard pill for a new government to swallow. However, delaying the medicine will prolong the agony. The best time to enter an IMF programme is when a government is new rather than when it has been around for some time and accumulated blame for mismanagement.

IMF programmes in the past have been detrimental to business because of the short cuts that governments have taken to meet IMF targets. In the most recent programme, the government resorted to collect more taxes from the already taxed instead of reaching out to broaden the tax base. IMF also overlooked the government’s tactics to delay tax refunds in a bid to window dress the deficit targets. Implemented intelligently, an IMF programme, along with structural reforms to fix the fundamental flaws in the economy, would help make industry competitive, boost exports, encourage import substitution, thus restoring balance on the external account.

Adopting a “Make in Pakistan” approach to strengthen domestic industry would create the much needed jobs as well as value-added exports and import substitution. The role of manufacturing in the economy has declined over the years and its growth is well below that of India, Bangladesh and Vietnam. Pakistan is rapidly losing its share in world exports, whilst Bangladesh has more than doubled its share in the last 15 years. We must identify and reverse the factors undermining domestic industry to drive up value-added exports and promote import substitution.

A market of over 200 million people provides domestic manufacturing (and service industries) the opportunity to acquire scale and become competitive. With this advantage, Pakistan can reduce its reliance on imports and find markets for value-added exports abroad.

Pakistan’s agriculture, livestock and dairy potential is vast but yield and quality are below global standards. This denies farmers adequate returns. The government’s support price for sugar-cane and wheat results in uneconomic surpluses of both sugar and wheat, at the expense of cotton, which the textile industry needs for value-added exports. We also need to encourage the growth of oil-seeds. The country spends billions in importing edible oil. A heavily taxed broadband internet limits penetration and growth of e-commerce and the digital economy, marring the potential for jobs and exports.

An FDI policy that does not differentiate in favour of net job creation, export generation, import substitution, infrastructure investment and the induction of technology, will lead only to short term gains, more than offset by long term repatriation. Like trade agreements, we must explicitly target, measure and skew our concessions to FDI which maximize jobs, lead to value-added exports and import substitution and have a positive and sustained impact on net tax revenue and foreign exchange flows.

Industry needs long term policies to promote transformation rather than short term transactional packages. The textiles industry in particular, needs to address the shift in demand from cotton to man-made fibres, upgrade and add sophistication to its products and diversify export destinations beyond the USA and the EU. Ease and cost of doing business, another impediment, can be addressed by simplification, unification and reduction of business-to-government interfaces, such as through digitisation to take one example.

Provinces and the federation must come together to facilitate this. There are multiple taxation authorities and more than 50 different types of taxes. Businesses are forced to act as unpaid tax collectors. They have to buy water from private suppliers often, produce their own power, arrange for their own security. All the while manufacturing, which represents 13.5pc of GDP is subjected to 58pc of the direct tax burden.

What is needed is a comprehensive alignment of all the polices that impact industry. These include trade, fiscal, energy, labour, industry and agriculture policies. Often ministries work in their respective silos, sometimes even at variance from each other, to the confusion, complexity and detriment of industry. There is also a tendency to pursue short-term rather than long-term objectives. To give the outgoing government credit, withdrawal of the full and final presumptive tax regime for commercial importers and the gradual reduction in tax rates are positive moves. But a lot remains to be done, especially in separating fiscal policy making from the collection of taxes and the infusion of talent and technology into tax administration.

Ultimately it is about taking control over our destiny. When leading global powers are prioritizing employment in their own countries, Pakistan, in its current stage of development, with millions of youth looking for employment, can least afford to outsource jobs. We should not become a nation of traders. Pakistan’s geo-strategic location must be fully leveraged in our commercial relations. The government should spend its five years on fundamental reforms to make Pakistan’s industry more competitive, rather than resorting to short term fixes. If it fails, we will continue to be mired and compromised by cycles of crises. Let’s Make in Pakistan.

The author is CEO of Pakistan Business Council