Human Rights in an Imperfect Democracy 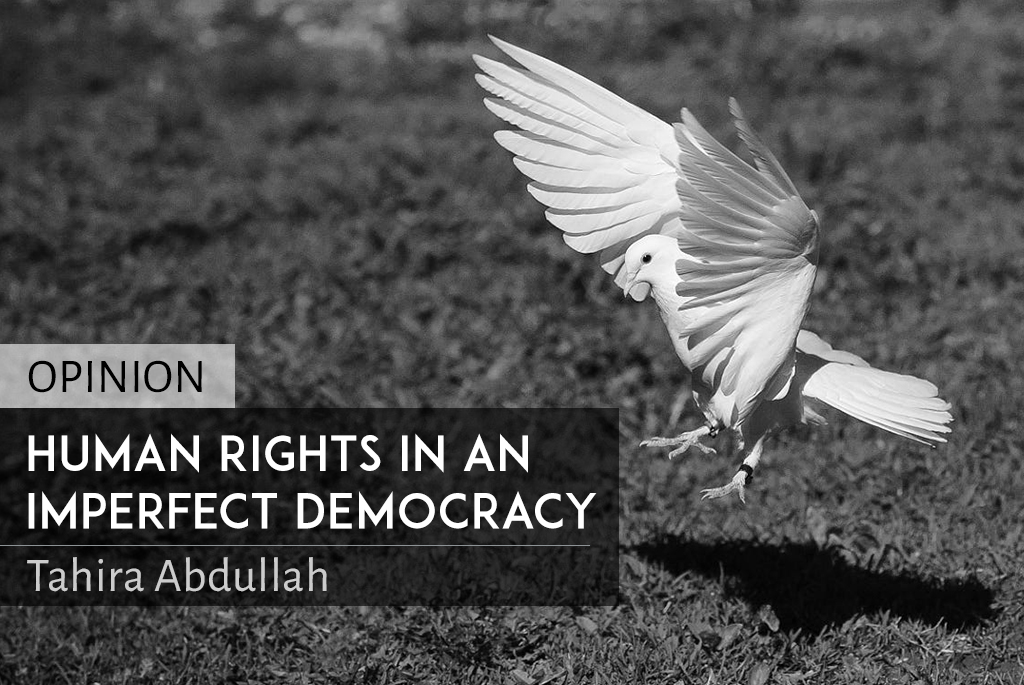 “Whereas recognition of the inherent dignity and of the equal and inalienable rights of all members of the human family is the foundation of freedom, justice and peace in the world;…”[1]

In 1948, the newly created state of Pakistan participated in the adoption of the UDHR, along with other newly-decolonized states.  71 years later, the UDHR is still striving for compliance by member states, and is now in need of revision, inter alia on gender-biased semantics[2] and content regarding the emerging forms of gender identity, family, work, migration, asylum, trafficking, religious extremism, terrorism, poverty, income inequality, information and communication technology, media, climate change and the existential environment crisis.[3]

In comparison with the UDHR’s 30 Articles, the 33 Articles pertaining to “Fundamental Human Rights and Principles of Policy” in the much-lauded (but much-amended and occasionally suspended, abrogated or mutilated) 1973 Constitution of Pakistan[4] go beyond the UDHR, by articulating the inviolability of human dignity;[5] and providing a detailed articulation of religious minorities’ rights.

Today, it is an indisputable, acknowledged fact that Pakistan does not stand tall in terms of respect for international human rights principles[6] and adherence to ratified human rights instruments.[7]  We also fail on our Constitutional touchstone of the trichotomy of power and clearly demarcated civilian-military boundaries.

Civilian-military relations carry the baggage of 34 years of military rule under four serving generals who assumed the office of the president, abrogating the Constitution and fundamental human rights.  Gen. Zia-ul-Haq mutilated it beyond recognition via the 8th Amendment – its theocracy-leaning components are still intact, despite the 18th CA.

The right to political participation and party-based electoral politics stands restored, but, although no longer considered “fledgling”, our parliamentary democracy still struggles against illiberal and non-democratic forces, severe polarization, turncoats and “electables”, feudal/tribal mindsets, and a paucity of civility in political interactions, both within and outside Parliament.

The Constitution enshrines the rule of law, as do the UN Conventions to which Pakistan is a State Party, among other things, torture (CAT)[8] and civil and political rights (ICCPR).  These are observed more in the breach than in compliance.[9]  Pakistan steadfastly refuses to ratify the UN instruments pertaining to enforced disappearances[10] and the death penalty – citing the “Islamic provisions” of the Constitution, which were llegally inserted by a brutal military dictator.[11]

Serious reforms are needed in the police laws, penal codes and criminal laws, which date back to the 1860s colonial era. They need to be brought into the 21st century digital era, with modern forensics, investigation and prosecution methods.

Balochistan remains the most-under-reported province, due to strict censorship and control over travel. Within Balochistan, the tiny Hazara Shia community is the most targeted, attacked and fast-diminishing ethnic minority[14].

The result of lack of universal access to primary health services and reproductive rights, are the shockingly high abortion, maternal and infant/child mortality and morbidity rates.  In which other country does the ICRC have to conduct a survey on violence against healthcare workers, especially vaccination teams?[19]  Similarly, girls’ schools and women teachers are also targeted. The incidence of child sexual abuse is rising annually, as too is gender-based violence in all its manifestations.

Despite Article 25-A, the universal Right to Education, there are still 23 million children out of school, but no government has declared an Education Emergency – as in Disasters.[20]  The new Education Policy (NEPF-2018) does not focus on sorely-needed curriculum and textbooks reform, or the content of teachers’ education/training, thereby flouting the unanimously endorsed National Action Plan.[21]  Radicalization of Pakistani youth, especially in madrassas,[22] goes unchecked.

Three decades after we learnt that our youth bulge had the potential to become a dividend, there is still no youth policy; students march on the streets for their unions and fundamental rights; and youth participate in Aurat Marches countrywide for women’s rights.

Despite the freedom of religion, belief and conscience enshrined in the Constitution and UN Conventions ratified, our religious minorities continue to suffer the worst forms of discrimination, hate speech, humiliation, injustice and inequality.  The Ahmadiya community fares worst of all, with Christians next in Punjab, Hindus in Sindh and Sikhs in Khyber-Pakhtunkhwa-NMDs.[23]  Kidnapping and forced conversion-plus-marriage of young Hindu and Christian girls continues with impunity.

Differently-abled people[24] still struggle for recognition of their rights and basic needs, e.g. ramps for physical access; sign language for the hearing-impaired; Braille printing for the sight-impaired; but the most neglected group are those facing mental health challenges, and lacking long-term treatment.  Some care institutions keep residents in horrific, inhumane conditions.[25]

Adherence to the UDHR and Constitution Article 19/19-A – freedom of expression – requires state acknowledgement and protection of media rights and freedoms vs. severe curtailment, constant critique and sermonizing on responsibilities. At the same time, there is a need for less sensationalism, stereotyping, and mindless, crude programming.

The above is a microcosm of just some of the violations of fundamental human rights – cutting across several divides – linguistic, rural-urban, geographic regions, genders, races, religions, sects, ethnicities, class, and so on.

Each time one thinks one has hit rock bottom, the bottom falls out yet again.

Nevertheless, there have been some bright moments, one of which is the Supreme Court’s expansion of the definition of the right to life vis-à-vis the environment crisis;[26] restoration of an independent judiciary;[27] SCP’s historic, landmark judgement on minority rights (2014);[28] SCP’s judgements declaring Jirgas and Panchayats unconstitutional and illegal;[29] SCP’s acquittal of Aasia Bibi, a Christian woman falsely accused and convicted for blasphemy, which carries a mandatory death sentence;[30] elected legislatures have completed two consecutive tenures, despite human rights violations; there are still a few brave souls writing resistance poetry, prose and newspaper columns despite the state’s IT-based curtailments; human rights defenders and civil society activists are still demonstrating publicly against the death penalty, torture, police excesses, enforced disappearances, illegal detention centres; rights-based development NGOs still dare to remain in operation, despite draconian obstacles and a severe funding crunch.

Despite the above, there is still a long way to go with constitutional, legal, judicial and police reforms; electoral reforms; and social sector policy reforms.  Above all, we need a seismic attitudinal shift in our conservative society, in order to move towards a progressive mindset; celebrating our diversity, pluralism, egalitarianism; and moving towards peace with justice for all.

There is a need to remind the state, but not human rights defenders-movement of the imperative to heed Nelson Mandela’s clarion call “to liberate all our people from the continuing bondage of poverty, deprivation, suffering, gender and other discrimination” – especially on the basis of religion, sect, ethnicity, sex, age, class, caste, feudal/tribal affiliation, education status, and geography.

It will take visionary leadership – demonstrating extraordinary empathy, courage and political will to stand up to the anti-democracy, illiberal forces and orthodoxy.  We continue our struggle without losing hope, but keeping our eyes wide open and remaining vigilant, despite the smog that surrounds and chokes us.

In Faiz’s immortal words: “Certainly, we too shall see the promised dawn”.

[2] The UDHR and our Constitution have in common the gender-biased use of the male pronoun “he” throughout both documents.

[3] The Women’s Action Forum (WAF) actually carried out such an exercise – sent as a written submission to the World Conference on Human Rights, Vienna, 1993

[4] In 1973, the ruling PPP achieved a remarkable and unprecedented consensus among the entire Parliamentary political spectrum, whereby the Constitution was adopted unanimously. But in 1985, then-military dictator, President Gen. Zia-ul-Haq strong-armed the theocratic 8th Constitutional Amendment (CA) through his nominated “Majlis-e-Shoora”. The 8th CA was not touched in the 18th CA (2010) and thus a theocratic dispensation remains intact to date.

[7] Including UN and other international/multilateral treaties, conventions, declarations, pledges – to which Pakistan is a State Party, or has signed or endorsed

[9] See the recommendations and concluding observations of the UN HRC peer review of Pakistan’s 1st, 2nd and 3rd UPR reports to the UN HRC.  See also the Shadow/Alternate reports submitted by civil society organizations on the UPR as well as on other UN Conventions, e.g. CRC, CEDAW, CERD, and others

[12] Now known as the Newly-Merged Districts (NMDs) of Khyber Pakhtunkhwa (KP) province, still facing regressive interim legislation (reminiscent of the draconian FCR/1901) and establishment controls, currently challenged in the SCP by a handful of brave politicians and an academician

[14] Hazaras themselves point to the huge cemetery of victims of targeted terrorist attacks, calling it a genocide

[16] See The State of Pakistan’s Children 2018 – annual reports by Society for the Protection of the Rights of the Child (SPARC, 2019)

[18] State Bank of Pakistan (2019): http://www.sbp.org.pk/reports/quarterly/fy19/Third/Special-Section-2.pdf. The SBP’s poverty, food insecurity and unemployment data are estimated to be 50% less than the figures calculated by renowned economists and respected independent national and international research entities

[22] Religious seminaries; but radicalization of students is no longer confined to seminaries – it has spread to universities, including elite institutions

[25] “inmates” might be a more appropriate word for longer-term residents of many mental health care institutions, especially in the public sector

[26] See Shahla Zia vs. WAPDA: PIL in the Supreme Court of Pakistan, PLD 1994, SC 693; and more recently, against tree-felling in Islamabad

[27] In March 2009, along with the lifting of President Gen. Pervez Musharraf’s Emergency (2007), as a resul of a sustained two-year movement led by Pakistani lawyers and civil society activists