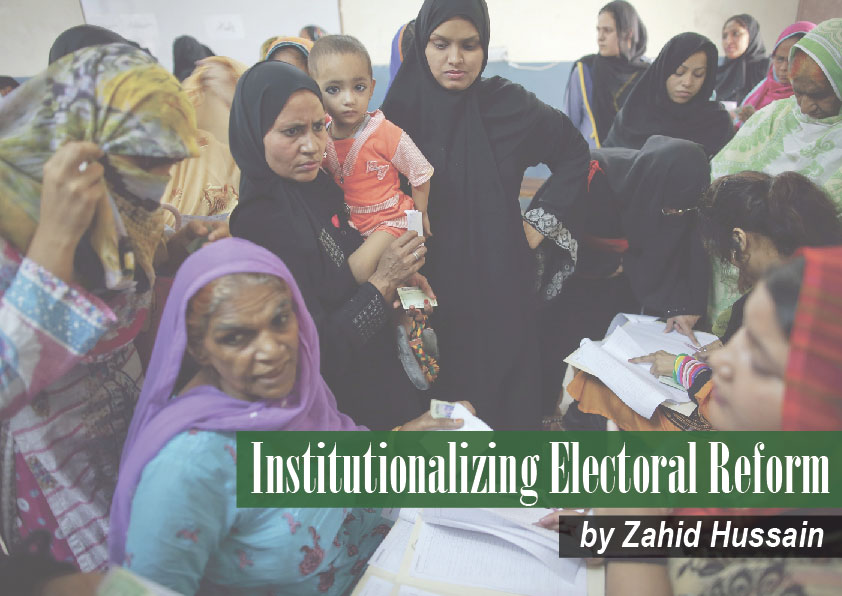 Beyond the headlines and Constitution Avenue blockade, there is growing consensus among political parties on the need for electoral reforms to strengthen democratic processes in Pakistan. This consensus stems from a realization that in order to sustain the democratic transition, the electoral system must be made more responsive and inclusive. Each political party must invest in it as a long-term agenda on its plate.

While the debate on electoral reforms is fraught, the way forward is not all opaque. Existing flaws in the electoral process have been brought to the forefront in the report presented by the judicial commission which was set up to probe the allegations of rigging in the 2013 general elections. While the commission rejected the allegation of a planned and organised electoral fraud, it acknowledged widespread irregularities in the processes adopted during the election. What is troubling is that no serious effort has so far been made to make the electoral process more transparent despite the fact that the legitimacy of almost every election in Pakistan has been disputed.

The European Union Election Observer Mission, in its 2013 General Elections report, noted that “fundamental problems remain with the legal framework and the implementation of certain provisions, leaving future processes vulnerable to malpractice and Pakistan not fully meeting its obligations to provide citizens the right and opportunity to stand as candidates and to vote.” To make future elections more credible there is a need to ensure that they are aligned with the expectations of all stakeholders.

A major failing of the present electoral system is that it is not satisfactorily aligned with changing demographic and political realities. Representation is hugely distorted because of the lack of a population census for almost two decades despite it being a constitutional obligation.  This must change. To ensure adequate representation and delimitation of constituencies, it is essential that a census be conducted before the next elections.  Equally important is the need to ensure that the census is not manipulated in favour of any particular region or nationality.

Simultaneously, weaknesses in the legal and administrative framework need to be addressed urgently. It is not enough to undertake piece meal reforms – what is required is a complete restructuring of the Election Commission, making the electoral process more credible, transparent and inclusive.

The formation of a Special Parliamentary Committee on Electoral Reforms, comprised of representatives from all major political parties, provides an opportunity to address these issues in accordance with the aspirations of all stakeholders, including the electorate. The Committee should assert the primacy of parliament in the electoral reform process by proactively identifying and resolving teething bottlenecks in the election process.

While one cannot agree more that representatives of the people must fulfil a certain basic criterion of integrity, the scope of Articles 62 and 63 of the Constitution is debatable. The parliamentary committee must revisit these controversial clauses inserted by the military government of General Zia-ul-Haq that require a candidate to be a “devout” Muslim.

Article 62 of the Constitution specifies the qualifications that a prospective parliamentarian must meet before he or she can be elected to the National or Provincial Assemblies in Pakistan, whereas Article 63 lists the disqualifications. Both articles list a number of vague and unenforceable qualifications.

Article 62(1)(d) states that a candidate shall be “of good character and is not commonly known as one who violates Islamic Injunctions.” Article 62(1)(e) of the Constitution provides that a candidate must be one who has “adequate knowledge of Islamic teachings and practices obligatory duties prescribed by Islam as well as abstains from major sins.”Article 62(1)(f) requires a candidate to be “sagacious, righteous and non-profligate, honest and ameen, there being no declaration to the contrary by a court of law.”

All stakeholder consultations agree that these provisions are a “Sword of Damocles” hanging over a candidate during the scrutiny process. It is left to the subjective assessment of a returning officer to decide who meets the qualification criteria under these clauses. Qualifications and disqualifications of candidates on the basis of one’s religiosity in themselves are anti-democratic. It must be left to the electorate to decide whom they want to choose.

These requirements restrict the choice of a competent CEC. Conducting general elections is largely an administrative task. While there are judicial functions carried out by the CEC and Members of the ECP, the judicial role is limited. To make the Election Commission more effective there is a need to do away with the requirement of the CEC and the members of the Commission being nominated exclusively from the judiciary. It may be helpful to note that there is no such restriction in any other South Asian country. Removing such a qualification from Article 218 of the Constitution will make a larger pool of qualified persons available for these key constitutional positions.

While it will take time to develop an exhaustive reform agenda that reflects a cross-party consensus as well as broader societal perspectives on electoral reform, the effort must be rooted in public opinion and regular stakeholder consultations. The parliamentary committee must not focus solely on the legal and administrative aspect of elections, but also address the political context in which elections take place for Pakistan to adopt a robust and effective electoral system. It is a long journey but a beginning must be made.

The writer is a journalist and author. He tweets @hidhussain.