Is democracy threatened by governor’s rule in Balochistan? 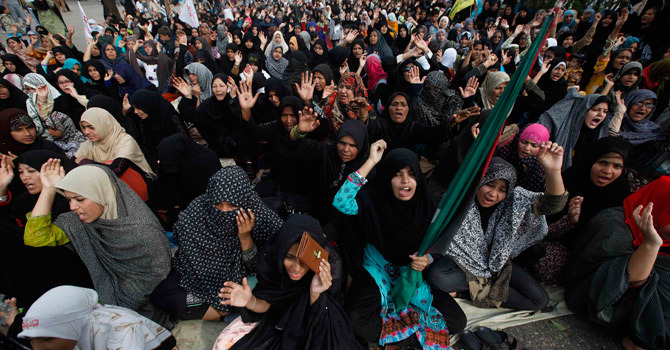 With the federal government set to end Governor’s Rule in Balochistan to set up an interim administration for elections, it is time to evaluate if the move helped improve the security situation in the province. This is important particularly in the aftermath of the February 16 bombing targeting the Shia Hazara community in Quetta that killed nearly 100 people.

The broad consensus which emerged in January to dismiss the provincial government in Balochistan was not against democracy. This popular opinion developed after demonstrations took place across Pakistan against Hazara killings by a militant religious group in Balochistan. It was against the continued indifference of the provincial government led by Chief Minister Aslam Raisani to the killings of Hazara Shias and the collusion of certain elements of his administration with terrorists.

The members of the Hazara community staged a peaceful but powerful protest at Alamdar Road in Quetta, Balochistan’s capital. With the bodies of around a hundred people killed in the January 10 attack, they sat in the freezing cold for over three days. They were convinced, after four years of rule, that Raisani’s government had failed to protect the people of Balochistan from extremists.

The countrywide protests last week after the Kirani Market attack were a replay of the Alamdar Road protests. The Shia community and their sympathisers were agitated, and they renewed their demand that the military take the lead in providing security in the province.

Following negotiations with the government, the Shia leadership showed flexibility on the demand for an army-led operation. This concession did not go well with the community, but it was given because Shia leaders and the Hazara chiefs saw that unlike the Raisani government, some effort was being made to deal with the killers.

The alleged mastermind of the Alamdar Road attack was killed along with his three accomplices, while seven others were arrested in an operation by security forces the day the six-member government team held negotiations with those protesting against the Kirani market attack.

Low-level operations were initiated after imposition of Governor’s Rule, but no major breakthrough was achieved. There was progress only after the Shia community reassembled to protest yet another massacre. It is important to note the attempt by the Ahle Sunnat wal Jamaat, the reincarnation of the banned militant group Sipah-e-Sahaba Pakistan, trying to put pressure on the security forces that were carrying out operations against Lashkar-e-Jhangvi, which has claimed responsibility for numerous attacks against Shias in Pakistan.

In recent years, nearly 1,000 Shias, mostly from the ethnic Hazara group, have been killed in Balochistan. No police reports were registered against those nominated by the families of the victims. No one was arrested.

When Governor’s Rule was imposed, under Article 234 of Pakistan’s constitution, elements of the dismissed provincial government, led by the Jamiat-e-Ulema-Islam Fazl (JUIF) retaliated against the decision, claiming the move was a threat to democracy.

Given the troubled history of Pakistan’s democracy, this resonated with the media, but the proclamation of Governor Rule for 60 days won two major endorsements on January 29 – from the Supreme Court, and from the country’s major political parties.

Chief Justice Iftikhar Chaudhry, while hearing the case on Balochistan’s law and order situation, observed on January 29 that “the federation through the President took a step according to the Constitution”.

Many of these parties were part of the consultative exercise undertaken by the federal government before a decision was taken on the matter, i.e. a situation where the government of a province was deemed to have not been able to carry on its duties in accordance with the Constitution. All political groups consulted by the government supported Governor’s Rule.

It must be noted that in addition to political consensus, the Constitution provides for Governor’s Rule as an option exercised with parliamentary oversight. Article 234 requires any such proclamation to be laid before a joint session of parliament. Therefore, it cannot be assumed to be a threat to democracy.

It should also not be forgotten that two months before the Alamdar Road bombings, the Supreme Court, in view of the continued lawlessness in Balochistan, had observed that the provincial government had “no Constitutional authority” to remain in office.

The dismissal of a democratically elected government is always unfortunate, but in the case of Balochistan, there is no one to blame but the Raisani government itself. Those now in charge must do their best to improve the situation in the troubled province.