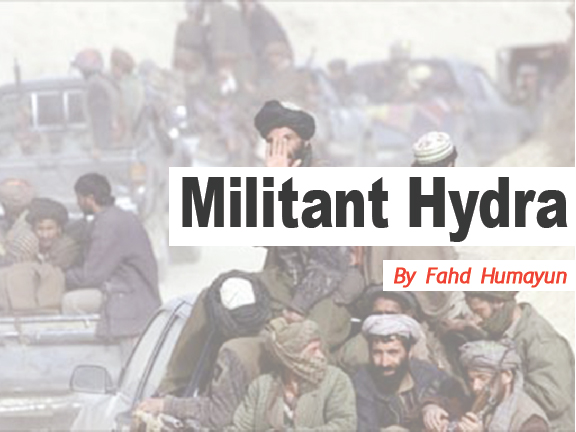 For militants sharing the inhospitable Pakistan-Afghanistan border, winter is coming. Structural changes in the militant landscape have left terrorist game plans in a state of flux. The Tehrik-e-Taliban Pakistan (TTP) is in disarray; a deck of disillusionment against its absentee chief Fazlullah is looking increasingly stacked. Riven by infighting since 2013, the North Waziristan offensive has added salt to wounds: an ISPR statement this month reported almost 1,000 militants killed since the summer cleanup began in June. Punjabi Taliban chieftain Asmatullah Muawiya’s laying down of arms last weekend came as no surprise to some.

But given the United States and NATO’s shrinking regional footprint, the biggest long-term test for militant recruitment in Pakistan and Afghanistan may well be emanating from the Middle East: the lightning rise of the Islamic State that has laid waste to Iraq and Syria, and a seemingly resurgent post-OBL Al-Qaeda have thrown up two seemingly contradictory heirs to the international jihadist movement looking to cash in on an embattled militant base in Pakistan. In the absence of local de-radicalization initiatives, the emerging IS fingerprint in the FATA-Balochistan belt and Al-Qaeda’s new South Asia PR project suggests that the real contest for militant human resource is only just gearing up.

The Islamic State and Al-Qaeda are united in their shared vision of a Sharia-ruled caliphate. But the similarities largely end there. The IS, unlike Al-Qaeda, boasts actual territorial conquests, commands conventional ground armies backed by tanks and artillery, controls a monster propaganda machine, and has managed to shock the international community with its ability to render political geography null and void. Al-Qaeda, by contrast, is constrained by lost political space, aging leadership and dwindling capital reserves. In its favour, however, is a near-stellar resume of international experience, having staged attacks on nearly every continent in the past ten years.

In the emergence of two power poles – the Baghdadi led-Islamist conglomerate and the Zawahiri led Al-Qaeda franchise – militants operating out of the Pakistani tribal belt are now faced with two attractive but competing doctrinal narratives. Since the invasion of Afghanistan, links between Al-Qaeda and the Afghan Taliban have remained intact. The rise of the TTP cultivated new alliances of convenience, with local militants subscribing to both Osama Bin Laden and their Amir-ul-momineen Mullah Omar’s specifically anti-US, anti-Western diktats. The Islamic State’s fiercely sectarian and power-driven agenda, by contrast, is more localized than global, and while foreign fighters have been flocking to the newly formed state, it is yet to be seen if the movement can extend its empire outside the Middle East.

Fresh off battlefield successes in the Levant, the Islamic State has already made known its intention to internationalize brand and outsource agenda; the IS has money to spend, and knows that radicalized fighters from the Pak-Afghan borderland come cheap. Not to fall short, Al-Qaeda, has also declared its mission to ‘crush artificial borders’ and use a new front – the Qidat-al-Jihad – to wage covert war in India and squeeze maximum mileage out of South Asian sleeper cells. While the CIA’s divisive drone program succeeded in reducing Al-Qaeda’s reach in Af-Pak to all but a titular presence, the network dodged extinction by shifting operational staging ground to North Africa – most notably in Mali, Kenya and Somalia. But its regional lieutenants – Khorasani and Shakeel Haqqani – kept up operations in key cities. This August Khorasani, in conjunction with the Islamic Movement of Uzbekistan (IMU), claimed responsibility for brazen attacks on two Quetta airbases.

Such attacks are only likely to continue in Pakistan where the TTP itself is weathering an identity crisis: the group’s atomization into the Jamaat-ul Ahrar (JuA) splinter and lost Punjabi brigades is instructive for a policy community that has feverishly tried to forecast and analyze the organization’s aims and capabilities. With Khorasani, now expunged from the original TTP shura, at the head of the JuA intelligence wing, this latest breakaway signals a return to the TTP’s pre-2011 roots: leaner, more fluid cells with better urban reach, and less constrained by the idiosyncrasies of a leader hiding out in Afghanistan.

Minus the muscle of the Mohmand war machine, it is quite likely that the TTP’s operational reach will hamstring; the parent group, now also divorced from the Punjabi Taliban, will be forced to resuscitate its linkages with the Afghan Taliban to retain ideologically rigour and pull. As ISAF activity winds down in Afghanistan, the ability of Karzai’s successor to face off the insurgency in the south and east and plug escape tunnels into Pakistan will be critical in stunting these new interdependencies. In Afghanistan, politically uncertain futures and the Abdullah-Ghani election standoff is only likely to catalyze the amalgamation of Islamist groups under a pan-Islamic banner. With outfits such as the caliphate-oriented Hizb-e-Islami in Afghanistan raring to back the new Islamic State, the survival of the TTP lies in tapping into Pushtun discontent, opposing NATO’s mission, and carving out a mini emirate that spans both sides of the international border with Afghanistan.

The JuA’s strategic focus in the coming months, meanwhile, is likely to be territorial rather than transnational, centered on Pakistani cities and institutions of state. This means a broader ambition of rebuilding its terrorist infrastructure post Zarb-e-Azb, reigning in rather than extending its activities to the Kashmir valley. The onus of preventing JuA successes lies on Islamabad’s civilian administrations to safely administer and hold cleared territory and disallow urban pockets from being recycled into terrorist cells. A more permanent worry for the Pakistani state, however, is that of the JuA – especially the group’s rabid Qari Shakeel wing – borrowing more from the Islamic State’s sectarian playbook; this danger is especially pronounced given the feverish Sunni-Shia street conflict already in play from Balochistan to Gilgit-Baltistan, and the conveyor belt of rightwing religious seminaries incubating intolerance and extremism deep in the heart of Punjab.

For CT strategists in Pakistan, recourse to divide and rule tactics will probably offer better dividends in the days ahead when a star-crossed TTP and JuA find themselves locked in resource competition. While neither group is going back to the drawing board just yet, they will be looking to reframe organizational goalposts to insure shelf-life. In doing so, they’d be naive not to look to the newest militants on the block for inspiration.