Moving out of Foggy Bottom 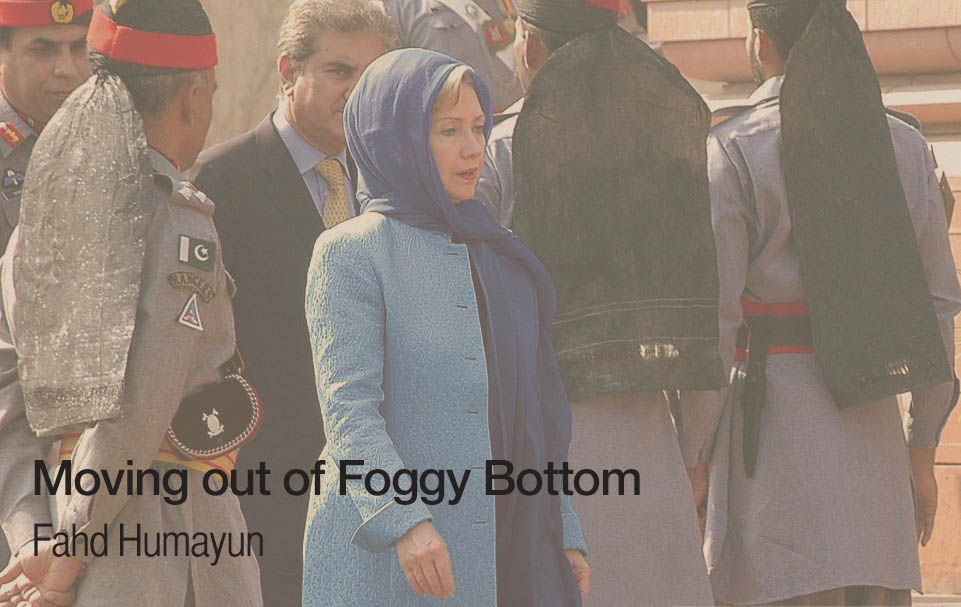 As Hillary Clinton moves into the Oval, the question in Islamabad is whether a fresh administration will bring with it the promise of a Pak-US reset. Given the PML-N’s growing incapacity at home and abroad, and problems untangling the American knot, cashing in on hard-won geostrategic gains and servicing lobbying efforts on the Hill, a diplomatic do-over with DC is long overdue.

But accrediting the dysfunction in the relationship to Islamabad alone would be a mistake. Clinton’s State Department years coincided with strategic divergence and an extended crisis in diplomatic ties, the interventionist legacy of which continues to sharply refract American attitudes on Pakistan. For a PML-N government that has been operating largely on foreign policy autopilot since, a Clinton Presidency riding on the experience of those years is unlikely to launch into a charm offensive. A further toughening of Congressional policy, a possible restructuring of the SRAP office, and distinctly greater bias on issues such as India’s entry into the NSG are some changes likely to impact the Pak-US equation.

The problem is that within Pakistan, the downstream effects of frustration with the US have hardened into policy agnosticism. With the US still leading a 13,000 strong military coalition in Afghanistan, Washington has yet to define its battlefield objectives or spell out a clear reconciliation and reconstruction agenda. In the fog of America’s longest war since Vietnam, its generals and lawmakers continue to conjoin a grossly mismanaged Afghan war effort to their conversation with Pakistan, unhelpfully viewing the latter in hard transactional costs. The introduction of a bill by the US Chairman of the House Subcommittee on Terrorism this October calling for Islamabad to be designated a state sponsor of terrorism speaks to a relationship still grounded in conditionality, and not a war being staged on Pakistan’s frontlines. Earlier this summer, shortly after it cut short Afghan reconciliation efforts by droning Mullah Mansour, a Congressional row over the sale of F-16s to Pakistan (that would have otherwise aided Pakistan’s nighttime counterinsurgency operations) brought into sharp relief the challenges facing Pak-US rapprochement.

Even as a new Presidency fends off bipartisan exasperation with an inherited “Af-Pak” syndrome, it should reassess the costs of hyphenating Pakistan with its regional ambitions. Burdening Islamabad with the costs of non-compliance is neither smart nor optimal. Neither is continuing to locate the relationship in a vexed patron-client idiom. While the unintended consequences of an American war machine in drift in Afghanistan play out in Pakistan’s courtrooms and schools, more than 200 Pakistanis have laid down their lives this year alone to the blowback of a war launched by another American President a decade and a half ago. Half a century since Pakistan and the US dived into SEATO and CENTO alliances, both sides must also realize that trying to forge new ground on ambiguous notions of strategic convergence will keep the relationship from evolving with the times. This is especially so given recent moves by Washington to recognize India as a major defense partner, bring India into the Missile Technology Control Regime, and offer it license to top US defense technology including the F-16 production line.

Pakistan must then find other ways to leverage to engage Washington, even if the two sides do not find their interests naturally dovetailing given America’s clear regional biases. The next US President’s two biggest challenges abroad – Russia and the threat of Daesh in the Middle East – present Pakistan the opportunity to rethink its partnership and mainstream its way back as a critical partner in the larger global polity. Islamabad’s own entente with Moscow, beginning with war exercises this year, entry points in the SCO and critical energy-infrastructure partnerships, could make Pakistan a key player in Central Asia’s emerging regional order. Islamabad’s ties with Saudi Arabia and Iran – two other players the US will look to define and shore up diplomatic arrangements with – afford Pakistan’s leadership the space to help link global security and counterterror conversations abroad. And a quadrilateral counterterror mechanism signed between China, Pakistan, Afghanistan and Tajikistan this year referencing the principles of the UN Charter signals anew Pakistan’s counterterror commitments and pledges. At home, even as spaces in eastern Afghanistan continue to go ungoverned, Pakistan’s attempts to mainstream FATA, the biggest constitutional undertaking since the 18th Amendment, should be telegraphed as an index of Pakistan’s own democratic consolidation.

As long as Washington and Islamabad presuppose that dependency must feed off a security-driven agenda, they will continue to be disappointed. Instead, the PML-N should push trade, investment, remittances as well as defense cooperation with the US, while broadening the security lens through which DC views its interests in the region. Estrangement cannot and should not have to be the default fallback. Pakistan must also do a better job of soliciting American recognition and relocating itself within the American strategic equation in a way that reflects the country’s dynamic geostrategic capital. Even as Pakistan fights a deadly counterinsurgency war, continues to push for engagement with New Delhi, and stands ready to help facilitate Kabul’s peace efforts, it is the $46 billion land corridor to Kashghar, China that is likely to be the defining Pan-Asian regional project of the next decade.

This is important, given a Hillary Presidency’s natural predisposition to the US rebalance to Asia. At the same time, Pakistan needs to improve the way it messages the lessons learnt from waging the world’s largest inland counterinsurgency operation, its drastically altered security prerogatives and new-world paradigms. Any diplomatic do-over will have to be a two-way street, but this will be hard to achieve without a credible foreign policy statesman or woman at the helm of affairs leading an empowered Foreign Ministry and answerable to Islamabad’s Parliament. Pakistan also needs to do a better job of signaling, both at home and to Washington, that the CSF it continues to receive from the US is not aid, but rather reimbursement for the daily cost of deploying about 170,000 troops in the frontier and for having provided sustained road communications for logistics support to coalition forces.

A less populist post-Wilsonian Washington will certainly look to adjudicate its regional relationships for greater returns. But the next POTUS must also realize the diminishing returns of using Afghanistan and transactional quid-pro-quo as the default filter for the distribution of US preferences in the region. Situating Pak-US convergence in the context of a sovereign, strategically viable and democratic Pakistan, a feat that successive American presidents have failed to pull off, would be a start. Mrs. Clinton’s no-frills Presidency can also offer Islamabad the opportunity to incrementally recalibrate the relationship, but for this to happen the PML-N will have to do more than just its policy homework, including stablising its government politically. There is no reason why distrust, or resentment, should be frozen in aspic.