No Country for Doves 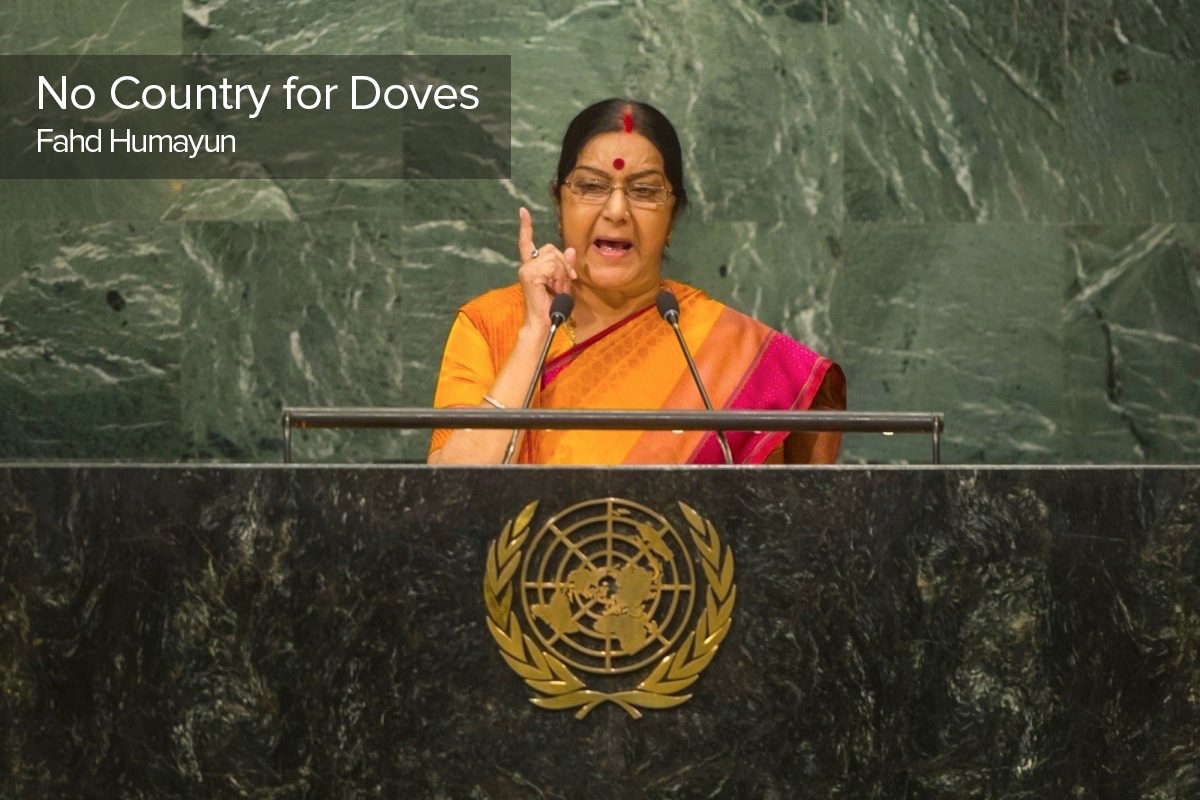 In a recent report “Are India-Pakistan peace talks worth a damn?” strategic expert Ashley Tellis questioned the utility of sustained dialogue between New Delhi and Islamabad. Diplomatic engagement, Tellis argued, was “less pivotal to the larger ambition of peace than a fundamental transformation in Pakistan’s strategic objectives vis-à-vis India”.

While there can be no two ways about the need for peace in a nuclear-armed region, peace like truth telling is an indivisible burden. Halfway through its first term, the Modi-led BJP establishment next door deserves special mention for having frustrated the search for a rational middle ground between Pakistan and India. At the cost of hardening political sentiment, India this month admitted to operationalising a strategy of state-sponsored aggrandisement through CFVs and cross-border shelling explicitly targeting Pakistani civilians along the Line of Control and Working Boundary. While India’s EAM took the UNGA to extoll the virtues of her country’s anti-terror credentials, the Indian BSF took to salami tactics on the border: small arms, heavy weapons and mortars, killing as many as 20 Pakistani civilians and soldiers this September. Indian state interference, meanwhile, including from across Pakistan’s western border, continues to undermine national peace and stability. India’s own analysts are now on record acknowledging Indian support for the TTP, corroborating testimony of former TTP soldiers who have surrendered to the state. And Tellis’s attempt to cast Kulbhushan Jadhav as an instance of “Pakistani abduction” is a reminder of the intellectual prevarication Pakistanis run up against when they bring up their strategic concerns vis-à-vis India.

At the UNGA, India’s combative Foreign Minister spent eight and a half minutes in a hardnosed assault on Pakistan, questioning the principles advocated by Pakistan’s founder Mohammad Ali Jinnah, but not pausing once to acknowledge her government’s crackdown in the occupied state of Jammu & Kashmir. Human rights watchers have every right to be alarmed: New Delhi’s talk of Indian exceptionalism is glib and glossy, but doesn’t quite plaster over the hard realities of its repression of the post-Wani Valley. State atrocities this April depressed J&K voter turnout to a meager seven per cent, the lowest in 30 years. And Indian military triumphalism on the LoC is perfect fodder for diverting attention from the still-aborted Kashmiri right to self-determination, and for fever-pitch hypernationalism eating away at whatever’s left of India’s rational center.

That’s not to say baseline constituencies for India-Pakistan peace are absent, even if their representatives do happen to be hemmed in by strategic commitment traps. A 2014 public poll in India showed that roughly 53 percent of Indians favored engagement with Pakistan to reduce bilateral tensions. Only 30 percent were vehemently opposed to the idea. And despite the toll on public sentiment from Indian escalation on the LoC, a Gallup poll this January showed that 68 percent of Pakistanis still favor dialogue with India.

While foreign policy preferences are rarely immutable, the challenge for both sides is that India’s political classes with rare exception have taken to framing Pakistan as a single-issue problem; Pakistan’s, conversely, actively refrain from black-boxing their neighbor despite the clear public sentiment on the core issue of Kashmir. Both sides have groups on the right, but the difference is that India has elected its fundamentalists to Parliament. Today you will be hard pressed to find a Pakistani legislator calling for the dismemberment of India, but will be spoilt for choice for hostile rhetoric on the Indian side. In New York the Pakistani Prime Minister spent four minutes discussing India’s doctrine of limited war against Pakistan and the need to peacefully and expeditiously resolve the Kashmir dispute. The difference between the two countries’ presentations could not have been starker: while PM Abbasi spoke categorically but rationally to legitimate security and human rights concerns, the Indian representative resorted to sound and fury designed to stoke hard-right nationalist galleries back home already busy building electoral roads to 2019. The result, a display of Pakistan-bashing rooted in fiction rather than fact, could be read as a signal that the ruling party in New Delhi intends to delay prospects of serious talks until after a new government is formed.

Such a delay ignores the damage being inflicted by India’s current policy of seeing low-intensity conflict with Pakistan as an absorbable short-term cost. In Pakistan, a civilian-brokered commitment to improving ties with India is not inured from political breakdowns. The Modi government’s public show of support for a secessionist Baloch narrative, and strategic designs to isolate Pakistan, even if pro forma, is testing the mettle of even the most “pro-talks” of constituencies. Trade and business lobbies that once pushed for open borders predicated on absolute rather than relative gains are finding it harder to pitch for rapprochement in the current climate. And the combination of a new Foreign Minister and Foreign Secretary in Islamabad will continue to be wasted on cross-border antagonism from a neighbor that has put a clear premium on hubris and that frames dialogue with Pakistan as a costly concession. At a recent Asia Society event, Foreign Minister Khawaja Asif fell short of saying the one thing that bore repeating: that punitive escalatory tactics by New Delhi are making it much harder for the Pakistani state to sell a national security discourse at home that can also be pro-India.

Not surprisingly, America’s regional policy of emboldening New Delhi is increasing the number of takers in India for offensive-defense as a legitimate and electorally profitable strategy. If President Trump’s pooling together of Afghanistan, Pakistan and India under a new South Asia strategy had created any false hopes of Indo-Pak re-hyphenation, these were quashed by General Mattis’s visits to New Delhi and Kabul last week. Instead, an old but familiar regional disconnect is back in play, even as Pakistan remains on-message about the need for all players to step back from visceral warmongering. While Pakistan’s own track record of delivering on peace bargains has been less than stellar, its leaders have by-and-large been consistent in their messaging of a multi-party consensus for dialogue with India as a stepping-stone to regional peace and stability. But it is questionable whether they can continue to do so given the diminishing returns of such posturing, and the fact that nobody’s willing to listen on the other side.