Not out of the Woods, Yet 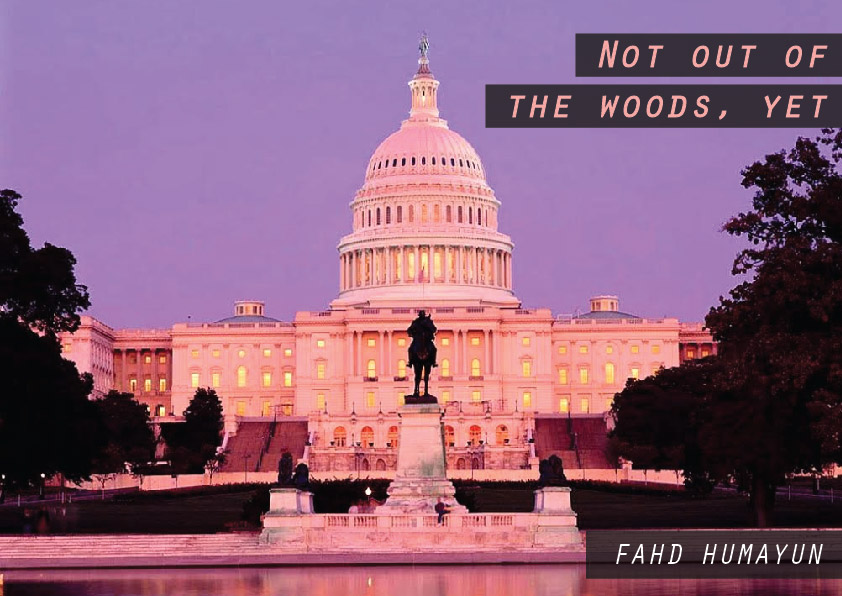 The sequencing of events is symptomatic of efforts to bail out a stagnating relationship that has been difficult at the best of times, and a labyrinth of transactional Catch-22s at worst. But the tone and tenor of the new NDAA document, together with the familiar sting of conditionalities attached to Congressional support for Pakistan’s fight against terror, show that Islamabad’s vital course corrections post-Zarb-e-Azb remain largely unrecognised in Washington. In the aftermath of the Peshawar attack, lawmakers on Capitol Hill, fresh off a hotly contested midterm, still struggle to frame a partnership with Islamabad as an essential strategic good.

For a bilateral equation characterised more by pitfall than promise this past decade, a Republican Congress’s appetite for offering assistance to a hyphenated Pak-US relationship is likely to be scant. With new Senate committee leadership appointments scheduled for January, looking to include Republicans such as John McCain, the centre-right will undoubtedly push to aerate a tired AfPak focus in favour of more traditionally bankable alliances – starting with India and Japan.

Against this backdrop of shifting priorities, if relations between Pakistan and the US are to stand any chance, they will need to amount to more than the sum of the five procedural working groups fleshed out under the Strategic Dialogue umbrella, reactivated earlier this year. While 2014 was about incremental normalisation, diplomats in both capitals will have to run doubly fast in 2015 to construct a roadmap for improved and crisis-proof interaction.

This includes: broadening and sustaining day-to-day engagement beyond the perennial Shakeel Afridi-Afia Siddiqui pressure points; leveraging what can be offered in the way of a dignified ISAF exit from Afghanistan; building on Pakistan’s unique position as a geostrategic bridgehead; and recalibrating the basis of the relationship as one that can withstand the wear and tear of crisis shock therapy.

Two recent developments suggest a rare window of strategic convergence: the attempted targeting of TTP chief Fazlullah in eastern Afghanistan, followed by the transfer of Latifullah Mehsud from Bagram to Pakistani custody. But the North Waziristan cleanup itself will only function as an effective Pak-US CBM for so long. Notably, the civilian leadership in Islamabad will have to decisively follow up counterinsurgency efforts with FATA’s post-op socio-economic rehabilitation. Islamabad will also have to demonstrate a resolve to confront extremism in Punjab, given that the latter is likely to be raised as an agenda-item when President Obama visits New Delhi come January.

The CIA’s fingerprint on counterterror ops, meanwhile, is unlikely to diminish in 2015 (indeed, it can likely increase sans ground presence in Afghanistan). And though the Pentagon has acknowledged Pakistan’s crucial role in dismantling terrorist infrastructure in the tribal belt, targeting the Haqqanis is likely to once again be billed as non-negotiable deliverable by House Republicans under Operation Resolute Support.

With Pak-Afghan relations looking to be reset, the field is open for the Pak-US relationship to be repaired minus the baggage of ‘do-more-in-Afghanistan’ directives. For this to work, however, Islamabad will have to be viewed as more than just a stabiliser in Afghanistan, a war that has run longer than Vietnam, and cost Congress more than the Marhsall Plan. And while Pakistani policymakers have proactively touted a no-favourites policy in Afghanistan, Washington will need to similarly temper its approach to a post-2014 South Asia. Crucially, triangulating bilateral conversations through Kabul or New Delhi, as was the Karzai custom, will be counterproductive and only fuel regional instability.

It would also be a mistake for Pakistani policymakers to limit the TORs of an Islamabad-Washington dialogue to strategic convergence only. Amidst a pressing energy crisis, Pakistan will doubly need American support for backing major megaworks plans, including the Diamer-Bhasha project. Raheel Sharif, visiting four years after General Kayani made his last visit, fits into the Pentagon’s project of showcasing Afghanistan as a foreign policy success. But the burden of reading political temperatures in DC cannot be left to the military. Indeed, in an age where public messaging makes partnerships, the PML-N government will have to buckle down to find new inroads into entrepreneurial America, and not just engage the political class.

In addition to navigating its newfound Republican majorities, America’s spring calendar is also likely to be dominated by presidential nomination announcements, followed by a season of grueling primaries. The next Democratic nominee is likely to invoke the Wilsonian human rights idiom more vociferously in an attempt to cleanup America’s post-Ferguson image; Republican contenders for the Oval Office, meanwhile, will be more cautious in their leveraging of military capital overseas.

That’s not to say that the Pak-US relationship is out of the woods – yet. The aim going forward should be a broad-based inclusive relationship that can be measured in improved bilateral messaging, and from thereon in tangible outcomes, pivoting on more than just mil-to-mil cooperation. As it is, with the Kerry-Lugar era firmly a thing of the past, shoestring fiscal budgets in DC will likely embed formal cooperation in hard conditionality. Which makes it all the more imperative to not leave this relationship to the whims of the scriptwriters of Homeland.

A version of this appeared in Dawn on 25/12/14 under the title ‘Repairs Needed’.