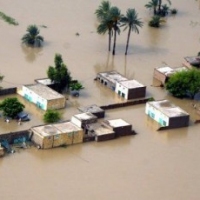 The current flood in Pakistan is the worst ever-natural disaster to strike that country even as it is fighting an existential threat from a major Taliban insurgency inside its Western border. The grim situation: 20 million homeless, a fifth of the country affected by floodwaters, and a government that was unprepared, despite warnings from its own National Disaster Management Authority.

Introducing a detailed and comprehensive National Disaster Response Plan issued in March 2010, that, among other things, listed the threat of floods during the monsoon season, Prime Minister Yousaf Raza Gilani stated “I hope that the guidelines set forth by the N.D.R.P. will be observed by all concerned.” As former Secretary of State George P. Shultz famously remarked, “Hope is not a policy!”

It took almost a week for the both the central government and provincial administrations to begin coping with the rising floods. And government has been playing catch-up ever since. Parts of Khyber-Pakhtunkhwa were still waiting for civilian aid three weeks after the flood.

Residents told visitors that provincial government phones were off the hook when they called for help. From Sukkur, in Sindh province, a relief volunteer reports, “Camps need drinking water supply, latrines and food supplies – the very basics, which are somehow missed by our government.” This has created an opportunity for the military to step in and for civil society to step up, including the social services arms of Punjabi militant groups, some of whom have been franchisees of Al Qaeda and the Taliban.

Though their numbers are small and they are restricted to certain inundated districts in Khyber-Pakhtunkhwa and Central and Southern Punjab, they offer a public relations counterweight to the generous United States aid package and the rapid response of the Pakistan army.
Most Pakistanis have by now heard that the United States is their largest aid donor and is leading the charge to get other “friends of Pakistan,” in Ambassador Richard Holbrooke’s words, to “step up to the plate.” The real risk is not that aid will not come. The real risk is that the U.S.’s main partner in Pakistan, the civilian government at the center and in the provinces may fail to deliver effectively and efficiently the aid that does arrive.
If that happens, then the men, women and children who are homeless today and who will be struggling to rebuild their lives in years to come will not be thanking a distant America. They will be cursing their own government. Or worse, joining the militancy that is gnawing at their social fabric.

This must not be allowed to happen. The enormity of the challenge facing a fledgling democratic system in Pakistan is huge. Even while the United States keeps a wary eye on Islamic militant relief groups, it must help in strengthening the civilian governance in Pakistan, its main partner in fighting the effects of this 100-year flood. President Asif Ali Zardari, pronounced at a press conference with Senator John Kerry last week “I am the governance” (shades of Louis XIV). Now that he has owned up to that weighty charge, his government must deliver on his promise by making flood relief rapid, transparent, and effective.