Papering Over Faultlines – The Fall Out of the Peshawar Church Bombing 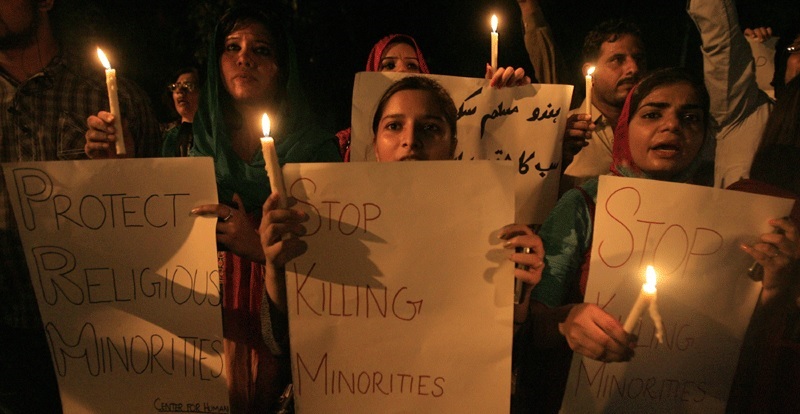 As I write this, Christian families in Peshawar, Pakistan are preparing to bury their dead, who were massacred in a suicide bombing at their church on Sunday.

As I write this, the man responsible for the deadly incidents at Pakistan’s Lal Masjid has been set free today, acquitted of all charges, while Aasia Bibi is still in prison on trumped charges with no evidence, as well as no chance of an appeal for another two years.

We’ve let a terrorist walk free, and have let a Christian mother remain in jail.

As I write this, the leader of the political party long promised to be the saviour of Pakistan’s present and future wants to negotiate with the killers, and instead of consoling the families of the fallen Christians, chose to use the occasion to blame foreign hands and conspiracies.

If you don’t believe that’s true, consider this: when the Babri Masjid was torn down in India, protesters stormed churches in Karachi. The Sacred Heart Church in Keamari was almost burnt down, the priest beaten up and the pews destroyed. Statues of Jesus and Mary were broken by being thrown to the ground. When the Prophet Mohammad video went up on Youtube, people spray painted churches across the country with hate speech such as ‘kill Christians’.

Yet so far, no one, not a single person, has been charged with anything related to the crimes I’ve mentioned so far.

I really want to believe that Christians are accepted in Pakistan, but the fact is that Pakistani Christians have to constantly look over our shoulder. If we were accepted, why did Gojra, Sangla Hill, Joseph Colony, Islamabad (3 times in 2002), Lahore 2006, Islamabad again in 2007, Aasia Bibi, Shahbaz Bhatti, Salmaan Taseer and now Peshawar happen?

We are now at a position where the status quo demands negotiations with the militants, and their ilk, who are responsible for many of these tragedies. I support peace talks in principle, but as a Pakistan Christian there are some issues that I see which must be addressed.

For starters, if the forces we are meant to talk to see no difference between American armed forces and Pakistani Christians, how are they supposed to be dissuaded from continuing to persecute Christians and other minorities? Have we envisioned a narrative which ensures the safety and security of minorities in a post-conflict scenario? If not, what exactly are we defending when we go to hold talks?

The fallout from the claims of responsibility for the attacks also shows that the adversary is itself fractured and uncontrollable. If we are to provide such elements a free pass to terrorise while we chalk up our plans, then a lot more lives of ‘lesser’ Pakistanis would be senselessly lost – this is certainly not the time to dither.

Finally, if all fighting stops and the guns are laid down, what happens then? Are the horrors and tragedies inflicted upon the Christian community, amongst others, going to remain unpunished? Will there be no justice for the thousands who have been targeted and killed? Will the retrograde and discriminatory laws which are used to persecute the Christian community be repealed, or will they be allowed to flourish further?

When we sue for peace, we must keep in mind the reasons why thousands of innocent people have been murdered, and ensure that any settlement does not serve as an unjust affront to the memories of the fallen.

Anthony Permal is a Pakistani Christian. He works as a digital communicator based in Dubai, UAE and writes for no audience in particular. He tweets @anthonypermal.