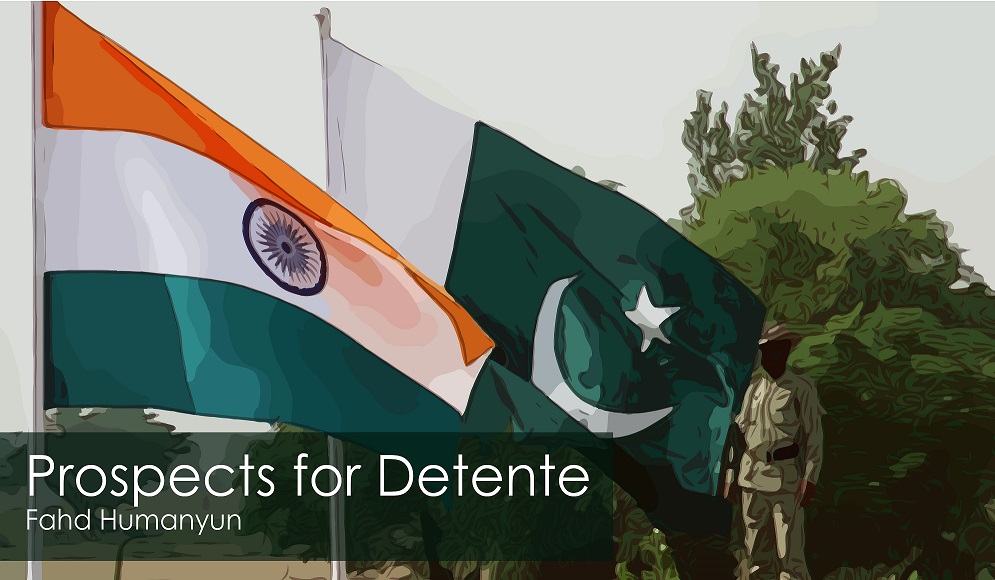 The Foreign Minister’s decision to criticize the National Security Advisor for meeting the Indian High Commissioner to Pakistan in Islamabad last week was unfortunate and poorly timed. It was unfortunate because in addition to exposing institutional rifts within the PML-N cabinet, it suggested that podiums for cross border hard talk are not just a fixture of corridors in Delhi.

It was poorly timed because the effects of recent efforts to cool temperatures on both sides of the border are only just beginning to be felt. A public reaffirmation by the FO and MEA to abide by the 1992 Code of Conduct for the treatment of diplomatic and consular personnel, a statement by the Indian envoy on the need to improve trade ties, and the 114th meeting of the Permanent Indus Water Commission in New Delhi to discuss matters related to the implementation of the Indus Waters Treaty, all in the span of a month, suggest the possibility of a truce, even if predicated on a cold peace.

The occupational hazards of a fragile dialogue process need no recounting. In India, the frequency with which politicians across the aisle have used warmongering to raise political temperatures, together with the Indian Army’s doctrine of disproportionate shelling on the LoC, has all but erased public memory of strategic restraint. For both countries, a troika of election cycles, the geopolitics of the US, China and Russia, and a deteriorating situation in Kashmir, make a transformative bilateral overhaul before new governments are safely installed in their respective capitals unlikely.

Despite this challenge, a recent meeting of the Chaophraya Dialogue, an India-Pakistan Track II th at continues to bring policy and opinion makers together for political engagement, agreed to a set list of recommendations for a credible minimum détente that can hold the peace.

One: the strengthening of crisis management mechanisms, including but not limited to regular meetings of the DGMOs, structured battalion commander-level flag meetings, and a calibrated reduction in the arms being used on the LoC, can help prevent uncontrolled escalation. Similarly while formalizing the ceasefire declarations of 2003 may not entirely inure the LoC from sporadic violence, a politically backed agreement validating the ceasefire could credibly buffer the relationship from political provocations and disincentivize election-trail jingoism.

Two: on the economic front, trade and business can motivate greater bilateral contact and engagement. Regular meetings of the Pakistan-India Joint Business Forum, as agreed to in the last round of dialogue between the Commerce Secretaries of the two countries, can re-energise important constituencies for a dialogue that in due time pivots to peace. Certain actionable steps – a reduction of tariffs by both sides, activating the sub-group on NTBs to address Pakistan’s concerns, supporting cross-LoC commerce and considering appropriate measures for trade facilitation – can build on the September 2012 roadmap for trade connectivity. The Indian High Commissioner’s recent statement supporting the removal of non-tariff barriers, tourism and the liberalisation of visa regimes indicates an appetite in New Delhi to improve on the current figure of $5 billion that represents two-way trade.

Finally, three: both India and Pakistan ought to recognize the inherent value of strengthening people-to-people contact in reducing cross-border suspicion and anti neighborly sentiment that continues to make even the mention of rapprochement politically costly. Indo-Pak relations may not find renewal in conditional diplomacy, or talks about talks, but it can locate it in tangible on-the-ground change and a politically backed rational public discourse. The following sidebar from history is just one of several reminders that both sides must stop viewing bad relations as a historical inevitability. On Prime Minister Nehru’s death, then Foreign Minister Bhutto ordered a plane to transport Indian journalists stationed in Pakistan back home. The Pakistan state went into official mourning, condolences were expressed in the Pakistan National Assembly and Pakistani flags were flown at half-mast out of respect.

Today, conviviality to that extent may be hard to imagine and even tougher to sell given the current low ebb of the bilateral equation. But that doesn’t mean both sides can’t, or shouldn’t, shoot for a sustainable thaw.

Please note that the views in this publication do not reflect those of the Jinnah Institute, its Board of Directors, Board of Advisors or management. Unless noted otherwise, all material is property of the Institute. Copyright © Jinnah Institute 2018.