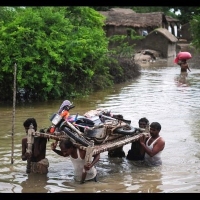 A tsunamic deluge of monsoon rains threatens Pakistan once again, floods have affected another 7.4million people this year, while twenty million people are still struggling to cope with the devastation caused by last year’s calamity[i]. The scale of the disaster and the aid response is less than last year, but the misery for those affected is just as real and the repercussions will be much greater. Millions who were already displaced have once again lost their livelihoods, crops and livestock and now thousands of men, women and children face the same reality.

Heavy monsoon rains over the course of last month have caused widespread damage to over a million acres of land, primarily in the southern province of Sindh and have affected 20,000 people over 20 districts in Balochistan. Badin is the worst affected district in the Sindh, with over6000 villages under water[ii]. Other calamity-hit areas include Benazirabad, Mirpurkhas, Tando Muhammad Khan, TandoAllahyar and Khairpur. The floods began early last month but torrential rainfall has compounded them, cutting off many villages and making them inaccessible to government and relief workers.

To date, 23 districts of Sindh have been severely affected by flooding, inundating 4 million acres of land including 1.7 million acres of agricultural land, resulting in the destruction of 80 percent of cash crops and over 130 billion rupees in losses. 80 percent of banana, dates, chilli, sugar cane and especially cotton crop (equivalent of 2.3 million bales) have been destroyed[iii].

1.2 million homes have been destroyed and victims have lost over 120,000 cattle due to diseases caused by the floods[iv]. Hundreds of thousands more livestock and poultry are at risk as water-borne diseases multiply. To make matters worse, the livestock that has survived might die of starvation as fodder has been washed away. The fate of poultry and fish farms has been similar, dealinganother severe blow to thousands of livelihoods. That in turn may give rise to massive food shortage and food insecurity and the amount of time it will take to regain use of agricultural land will cost the economy greatly.

Despite several warnings from aid agencies about the possibility of floods this year, the Pakistani government was confident that they were prepared and were capable of handing the situation without the United Nations (UN) and other international organizations.  As heavy rains struck Sindh in early August, the chairman of the National Disaster Management Authority (NDMA), Zafar Iqbal Qadir insisted the organization had the resources to manage the floods and therefore did not require international assistance. Since donors sent funds directly to international organizations, the government appears unaware of where the money was spent. Although the international community pledged a total of $1.9 billion dollars for the 2010 floods, 67% of this amount ($1.3 billion) was released andonly  $400 million has been accounted for in documentation. Therefore, government agencies felt that they should not rely on international assistance[v].  However, donors are unimpressed with the government’s aid appeal in a context where the elite is seen to evade taxes and money is spent on other “˜populist’ programs[vi].

It is apparent that both the government and international agencies faced transparency and accountability challenges that curbed relief and rehabilitation efforts last year. Other factors, including the socio-political and economic volatility in the country also had a negative impact. The government was not prepared to deal with such a disaster due to an inadequate disaster management system, poor emergency relief coordination and overlapping mandates of different organisations[vii]. A disaster management framework and policies are already in place but is important to transform them into effective management systems that can be implemented at the community level. In addition, clarity on the roles and responsibilities of government officials at the district, provincial and federal levels was urged by international agencies working on the ground who felt it would help prevent duplication in relief projects.

Despite last year’s hurdles, the NDMA claimed to have a contingency plan for floods this year and yet were unable to organize efforts for the 750,000 people who became displaced after initial rains. Meanwhile, UN agencies remained on standby until the President’s visit to flood-hit areas last week when the UN and other agencies were asked to intervene. Nearly three weeks after the initial floods, Prime Minister Yousaf Raza Gilani appealed to the international community and to philanthropists at home and abroad to step forward and help the government rescue and rehabilitate flood victims[viii]. China, Iran and the U.S have pledged assistance but more international assistance will be needed given the country’s domestic fiscal crunch.

The NDMA has already spent over 1.5 billion rupees on relief efforts and this number will increase to 8 billion[ix]. To date, 2,163 relief camps have been set up by the NDMA that accommodate 287,041 men, women and children[x]. Thousands of tents and food ration packs are being distributed by the government and the UN has also begun its multi-million dollar humanitarian assistance program in Sindh along with other international organizations helping the government focus on issues related to health, hygiene, food security and water and sanitation as well as assisting with the distribution of emergency relief goods.

The government’s appeal for foreign aid was slammed by opposition parties who felt the government should utilize its own resources to cope with the floods instead of depending on aid. However, they did not explain where the government would mobilise such emergency resources from domestically. The parties also condemned the government’s inability to adequately prepare for the floods and urged the ruling party to devise a strategy for the rehabilitation of the victims[xi]. Such statements assume that the government has the capacity and capability to deal with such situations yet when the first wave of floods hit, there was a realization by government authorities that the situation was out of their control[xii]. These factors highlight the need for a coherent policy on relief and rehabilitation efforts so there is clarity amongst government and relief organizations about their roles and responsibilities during an emergency.

According to a statement issued by the NDMA, health, education and communication infrastructure has been substantially damaged in Sindh[xiii]. 1.1 million houses have been destroyed, with nearly half a million in Badin alone[xiv]. This does not include damage caused by the floods last year. One is forced to question whether the scale of the destruction could have been averted if the government had genuinely prepared for flooding this year. For instance, In low-lying parts of the world where flooding is routine, people build their homes on stilts or on large rafts moored securely to the shore. As the water rises, the home rises with it and when it recedes, the houses move back to the ground, making them more resilient to disasters like floods. This has been done in neighboring countries like Bangladesh. It is a fairly “low tech”option that does not require heavy investment as houses can be made from straw, reeds, rushes, bamboos or jute-stalks[xv].

As political parties bicker about whether international aid is really needed, hundreds of communities continue to suffer. Heavy rainfall has created further damage in Sindh and Balochistan, hampering relief efforts and leaving more people without homes.The floods have already claimed over 200 lives, many of them women and children. The outbreak of disease along with food shortages means that the number of lives lost due to flooding is likely to increase.

Many factors that hindered previous relief and rehabilitation efforts are still present. These institutional challenges must be resolved as soon as possible if the government wishes to avoid a repeat of last year. It is already too late for the millions of people reliving this ordeal.