Resurgence of Polio virus in Pakistan is a national emergency 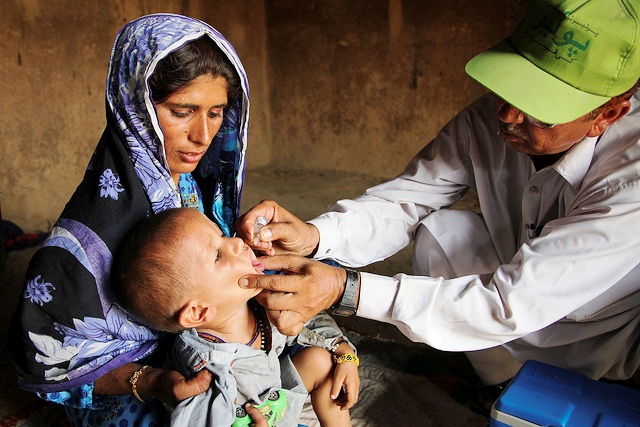 Pakistan is one of the three countries in which polio remains endemic. The Global Polio Eradication Initiative (GPEI) has recently reported that there are six sanctuaries for the polio virus: four in Pakistan — Quetta, the districts of Qila Abdullah and Pishin and Karachi — and two in Nigeria. Since the disease is infectious and potentially fatal, safe havens for the virus must be dealt with immediately to prevent breakouts and ensure global eradication.

Since Pakistan’s largest city is one of the last remaining bastions of the virus, it poses a grave threat to populations across the country as Karachi is home to large numbers of migrant workers and populations from all parts of Pakistan. The presence of the virus in Pakistan’s largest metropolis has not become a cause for public concern despite the threat it poses to millions of children.

Given the ease with which Polio spreads, efforts to contain the disease focus on preventative vaccinations, attempting to cover the entire population to prevent the virus from taking root. Since the virus invades the nervous system, it can cause irreversible paralysis in a matter of hours and leave victims crippled for life.[1]

Unfortunately, hopes to vaccinate the population against Polio continue to face stiff resistance due to a combination of social and political issues. During the last year, 198 cases of polio were reported in the country; a 15-year high and the highest number of cases recorded globally.

Polio eradication efforts in Pakistan have been plagued by religious, cultural and political opposition having fallen victim to misinterpreted theological opposition. Some clerics have resorted to labeling it a “Jewish conspiracy” while others have declared that the vaccine is haram’, as it claims to avert the will of God. Those who oppose the effort have employed all the tools at their disposal to stop the vaccination process.

One of the biggest reasons for Pakistan’s polio predicament is the religious controversy that surrounds the vaccine. Opposition to administering Polio drops, both in Pakistan and other countries, such as Nigeria, has been built upon what some claim to be ‘religious grounds’. While the Pakistani Taliban announced that they were opposed to the polio vaccine as an article of faith, the Nigerian jihadist group, “Boko-Haram,” have seriously threatened ongoing efforts to eradicate polio in Nigeria according to reports from the National Primary Health Care Development Agency.

The CDC’s Emerging Infectious Diseases journal explains some of the opposition to the immunizations, by describing how “the local Taliban have issued fatwas denouncing vaccination as an American ploy to sterilize Muslim populations. Another common superstition spread by certain groups is that vaccination is an attempt to avert the will of Allah.”[2] Similarly, in Nigeria, Muslim leaders claimed that the vaccine was “a Western ploy to spread HIV and sterilize Muslim girls”. This misinformed religious rhetoric triggered a nationwide boycott of vaccination campaigns, causing “a rash of new infections, [as] the virus jumped to about a dozen other countries.”

For reasons similar to the Nigerian case and because of uninformed discourse emanating from clerics, children in some parts of Pakistan are being denied access to the vaccine.

The Impact of Global Politics on the Polio Vaccination Campaign

Efforts to eradicate the disease in Pakistan are struggling in the face of population movements, conflict and opposition from community leaders. As a factsheet from the Mayo Clinic illustrates, Polio “spreads primarily through the fecal-oral route, especially in areas where sanitation is inadequate.”[3] Large parts of rural and peri-urban areas in Pakistan remain without adequate sanitation and serve as breeding grounds for the polio virus. [4]

Furthermore, given the current dynamic of Pak-US relations, immunization drives have become a victim of larger political currents sweeping through the region. Since international assistance and cooperation is required in the Polio eradication efforts, the campaign has proved a popular target for those opposing the government and its foreign policy. Unfortunately, this fact is used to fuel mistrust and paranoia amongst people about the effort.

The initiative received a further blow when the CIA collected DNA evidence for the identification of Osama bin Laden under the guise of a polio vaccination campaign. As news of this fake campaign spread, it has had a devastating effect on the current and sincere attempts to control the disease. According to CNN, “InterAction, which represents nearly 200 US- based non-government organizations, expressed ‘deep concern’ about the fake campaign” in a letter to the CIA Director, going on to say that “this distrust is only increasing in light of reports about the CIA campaign.”[5]

Opposition to the polio campaigns has been galvanized by the incident and resistance to the third round of National Immunization Days that aims at targeting 34 million children, has also escalated. Express Tribunereports that North Waziristan has been excluded from the campaign after militant leader Hafiz Gul Bahadur announced a ban on vaccination drives, calling them a pretext for US spying. Shahibzada Khalid, Deputy Director of the FATA Cell of Expanded Program on Immunization reiterated the nature of the threat, telling the newspaper that “North Waziristan was on the list until today. But now we have taken it off due to the threat from Hafiz Gul Bahadur.”[6]

Bahadur is not alone in his opposition. Prominent national cleric Maulana Sami ul Haq, previously a strong supporter of immunization efforts who publicly administered drops to his own grandson and urged others to do the same, has also renounced his support for Polio campaigns. In an interview with the British Daily Telegraph, Haq went beyond religious grounds saying “the moral behind imposing a ban on the vaccination is not about whether it is un-Islamic or not, but the moral comes from the case of Shakil Afridi.”[7]

Positive Developments and the Way Forward

While the highly pervasive opposition to the Polio vaccination effort is severely impeding efforts to eradicate polio from the region, there are pockets of good news as well. Technical experts, local NGOs and civil society activists including a few political personalities have been taking initiatives to strengthen the fight against the crippling disease. Pakistani cricketer Shahid Afridi recently became the new champion for polio eradication in Pakistan. He is representing the national polio eradication initiative on behalf of the Prime Minister’s Monitoring and Coordination Cell for Polio Eradication, Rotary International, UNICEF, and WHO.[8] This is a welcome move as Afridi has mass appeal in high risk and high incidence areas.

Furthermore, the government of Khyber Pakhtunkhwa recently announced a commitment of 35 million rupees to strengthen union councils in their fight against polio. Hopefully this commitment will yield real results and increase awareness in the region which is at the heart of the polio endemic. The Global Polio Eradication Initiative says that Pakistan’s polio program progressed strongly over its first 12 years; in 2005, it reported just 28 cases against 20,000 cases per year in the early 1990s. According to its most recent report published in June 2012, “Pakistan appears increasingly well placed to reach the end.”[9]

Efforts to eradicate Polio have become intertwined with not just contentious state-society relations but also with wider transnational issues such as the War on Terror. Unfortunately, as a result, marginalized segments of society will have to bear the brunt. With the polio efforts supported by strong international actors, they are being viewed as foreign intervention in communities that fiercely oppose any kind of intrusions by international or even local “outsiders”. Given how our neighboring country India dealt with the challenge by adopting an “aggressive agenda to strengthen routine immunization and maintain supplementary activities in order to maintain high immunity”[10] and has been polio free since January 13, 2011. Pakistan should learn from the Indian experience to take the fight against Polio forward.

There is also an urgent need to correct the information asymmetry that exists around the quality and safety of the Polio vaccine. This needs to be accomplished by mainstreaming the policy discourse around the Polio vaccine and taking it beyond medical and technical jargon. The safety of the vaccine needs to be demonstrated to communities by establishing a cadre of local and well respected champions for the cause of Polio eradication.

Recent fears about foreign spy networks infiltrating local communities under the guise of the polio vaccination campaign must be addressed. Vaccination agencies tend to use local volunteers for vaccination efforts but since the credibility of the effort has been compromised due to recent global developments, steps need to be taken in conjunction with communities to select and train trusted immunizers who will get access to households in communities so that the vaccination effort does not fall prey to increasing mistrust between Pakistan and the West.

[9] Every Missed Child. Rep. Report of the Independant Monitoring Board of the Global Polio Eradication Initiiative, n.d. Web.http://www.polioeradication.org/Portals/0/Document/Aboutus/Governance/IMB/6IMBMeeting/IMB6_Report.pdf