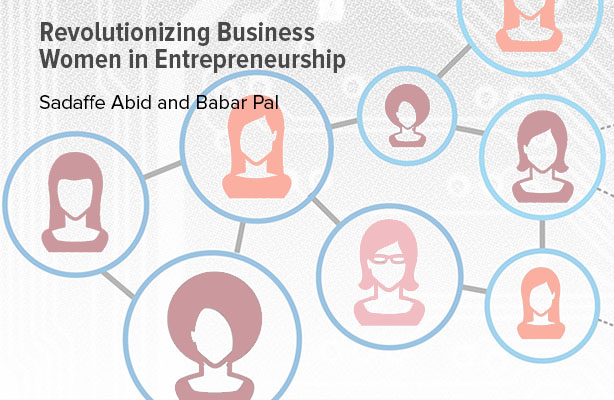 According to the Global Entrepreneur Monitor (GEM, 2015) more than 200 million women entrepreneurs are starting or running new businesses in 83 economies across the globe. In Pakistan, the entrepreneurship ecosystem has grown significantly over the last few years. A steady rise in new organizations, investment funds and initiatives to support entrepreneurs has been witnessed. As we enter the information era, there are greater opportunities for accessing new media resources and expanding the horizons of young, prospective entrepreneurs. Internet penetration has increased from 10% in 2012 to 17.8% in 2016 with 13.5 million broadband customers and 125 million mobile phone subscribers in Pakistan. Even more exciting is the unprecedented access to technology that is becoming available to one of our largest, underutilized resource reserves: women.

Research shows that companies with female founders perform 63% better than companies with all male founders. Women control approximately $20 trillion in consumer spending worldwide, and this is expected to rise to $28 trillion by 2018, with women making 80% of buying decisions. Despite the many benefits of female-led enterprises, however, only 22.7% of women contribute to Pakistan’s labor workforce, compared to 83.3% of men.

Why such few women? Pakistan is, as many countries in the region, a predominantly patriarchal society with many entrenched values and social mores. Women’s leadership roles are generally limited to running the household and caretaking while men take care of finances; a system which often leaves women with limited monetary independence or security. Due to rapid urbanization, increased cost of living, rising inflation and onset of the technological revolution, more women are starting to adopt a professional outlook to life by taking up white collar jobs and opting to set up small businesses.

The good news is, several upcoming entrepreneurs now have access to facilities which support women in their endeavors. Incubators provide free or subsidized office space and mentorship to businesswomen who are still in the developmental stages of building and testing their product or service. Currently, there are three notable incubators in Pakistan: The Nest i/o, LCE & Founder’s Institute, and Plan 9. Plan 9 is the country’s largest technology incubator. It’s an initiative by the Punjab Information Technology Board (PITB), founded in 2012. Since then it has graduated 102 companies, 67 of which are still operational. Some of their graduates have gone on to join global incubation programs. The emergence of incubators, particularly for the technology sector, reflects a global trend that fulfills a strong need in Pakistan.

In fact, the technology sector in Pakistan has been focused specifically on the service industry. It is only recently that we have seen the rise of start-ups creating products. Alongside the incubators, there are several other initiatives, competitions and conferences which promote enthusiasm, networking and raising awareness. One of the more exciting upcoming opportunities for female entrepreneurs is the She Loves Tech (SLT) competition, a global initiative designed to showcase the convergence of the latest trends in technology, entrepreneurship, innovation and the opportunities that all of these create for women. The Karachi-based social enterprise CIRCLE is holding the countrywide finals on August 19th, where young women will compete for a chance to take their startups to the global stage of the competition in China.

Sidra Qasim, a young entrepreneur and Co-Founder of Markhor, is an excellent example of a successful female-led entrepreneur emerging in Pakistan.  Her business originated from Okara where Qasim takes advantage of indigenous talent to provide customers with premium quality, handcrafted leather shoes. The company is built to international standards and has found a market for its products outside of Pakistan. They managed to raise a whopping $107,000 through a Kickstarter campaign. Despite an initial lull in their business, Qasim managed to create an international product and brand. She went on to get incubated, and today delivers products to hundreds of customers in over 30 countries.

We as a society need to emphasize success stories, especially when it comes to female entrepreneurs, and build cases to further entrepreneurial motivation among Pakistan’s youth. The resilience necessary to succeed in this environment makes Pakistan’s entrepreneurs that much stronger.