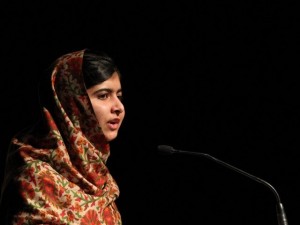 She didn’t win the Nobel Peace Prize. That’s totally ok. The award nomination is a milestone among many.

Malala Yousafzai, 16, is still proud and hopeful that she will move bigger mountains. So is mainstream Pakistan.

Without going into who got the coveted prize and why, we congratulate the OPCW for the important work they do, and set our gaze to the future.

I say mainstream Pakistan, because in my experience, this is the baseline that wants brave young women like Malala to give them hope and courage to face the rising tide of intolerance, extremism and militancy they face in the business of their daily lives. She represents that glittering core of unyielding resilience which has become the backbone of every citizen’s daily challenge in going to school, office or the marketplace in contemporary Pakistan.

So, before anything, let’s take pause to celebrate the fact that in the face of death-defying odds, Pakistan has produced a young woman who is remarkable to the world.

Yes, she is in danger of being over-packaged and objectified, but so what? At this level of global stardom, some PR-cum-development-world machinery has got to grind its mills. That’s not the point. Yes, there are hundreds of brave young Pakistanis being egged on to ask why their own trauma didn’t propel them to fame, but that’s not the point either. At all.

The point is Pakistan should please be allowed to revel in the fact that Malala has now become an icon of global championship for a girl’s right to an education, pointing us to the path of opportunity over despair. The point is that in this confusion and carping typical of our national psyche, let’s not forget that she is indeed a hero. She is a hero because in her person, she encapsulates so many debates, challenges and crises. She also personifies the leaps of faith needed, and the valour possible, to chart a way out of the fog of war we find ourselves in.

Most of us were silently, or openly, rooting for her victory. Hundreds of thousands of Pakistanis waited for the announcement from Norway, as did many others the world over. Television channels telescoped the breathless mix of pride and hope with which little girls in Mingora looked to Oslo, as did traders from Gujrat, fishermen from Pasni, fruit farmers in Gilgit, and homemakers from Karachi.

But there is another Pakistan that is rubbishing the nomination in two broad stripes.

One is the rightist that conflates Islam with the worst excesses of millenarian militancy and misogyny, demonising Malala as a handmaiden of satanic coalitions. This protagonist is no longer a marginal voice, lurking in the shadowed, layered protections of guns, cash and sweaty muscle. This is the barbarian now at our gates. This is the extremist who spews hate on the internet, manufacturing cyber shrouds on women’s bodies, which they fetishize. This is the militant who threatens people at mosques if they question sermons that valourize violence, in the name of religion that privileges peace above all. This is the terrorist that bears arms with the intent to kill, maim, kidnap and steal. They all hate Malala for fighting back, and what she stands for.

There is another, much more sophisticated derider of Malala.

This is the postmodern leftist, who hand-wrings at the poor young girl’s commodification by the “˜west’. Mostly, this is not a Malala-phobe per se, who resents her identity as a poster child for resistance to coercion, but quibbles because she has become a brand bigger than her authentic, grassroots self. But their reductive, often well-meaning, criticism misses the simple point that even Brand Malala fills a deep vacuum in Pakistan. It also ignores the volume of damage their objecting voices do in a polarized, fraught environment where the air is taut with the gun-smoke of terror and the wild-eyed certainties of suicide missions.  They ignore the need for clarity against an enemy which is contemptuous of doubt, or its philosophical groundings.

So please, let us see the Malala Moment for all the right stories it tells about us. Let us in fact, seize this moment in all that it embodies. Let us come together, to build momentum to ensure that it doesn’t pass.

The writer is Chair of Jinnah Institute and ex-Ambassador to Washington and former Federal Minister, Pakistan.