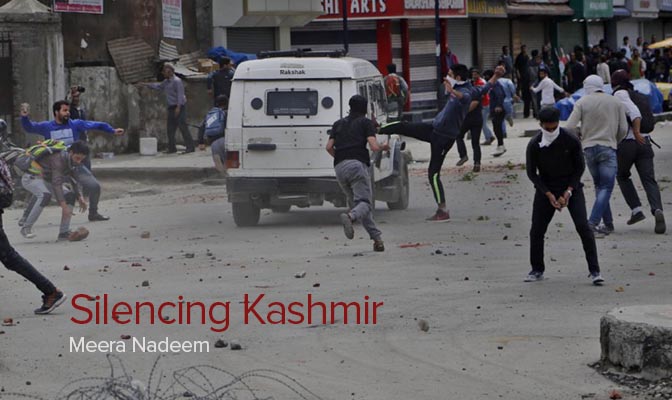 India’s blanket ban on 22 social media websites in Jammu and Kashmir has brought to fore the agency of social media in the latest struggle for rights in the disputed region. The youth of the valley are emerging as standard bearers of a new-age resistance not beholden to traditional centers of power in the valley. The latest round of resistance in Kashmir is one of narratives, and their most powerful ammo – social media.

The ban itself has met with extensive global criticism, including the International Federation of Journalists (IJ) and New York-based Committee to Protect Journalists (CPJ) urging India to immediately revoke the ban. The Government has defended the move by claiming that social media websites “were being misused by anti-national and anti-social elements” maintaining it was imposed “in the interest of maintenance of public order.” Yet, the fact remains that the innovative use of new media by Kashmiri activists has shed new light on India’s oppressive tactics and pushed the Kashmiri struggle for rights onto the front pages of international newspapers.

Of the state’s total population of 14.2 million, 70% are under the age of 35. This Kashmir youth, unassociated with the Hurriyat leadership and other Kashmiri political parties, are increasingly aware of their rights and charting a new path of resistance against the Indian state. Although the youth have always remained a significant feature of the insurgent landscape, what sets today’s generation apart is its new means of resistance, a shift from armed militancy to an unarmed intifada. To their cause, the very educated, charged, and tech-savvy Kashmiri youth have taken to popular social networking websites such as Facebook, Youtube, WhatsApp and Twitter to engage in what is emerging as a sophisticated wave of (un)armed resistance against the Indian state.

These social networking platforms provide frustrated youth with a powerful unregulated medium to promote their narrative, coordinate and mobilize for their cause, and expose state atrocities in the valley to the rest of the world in what is a growing war of information. The real-time nature of new media and its inherent ability to transcend geographical boundaries at the click of a button establishes a direct and immediate line of communication with the world, creating a “glocal” space for interaction by humanizing the “other” and creating virtual communities of people united in their struggle for justice. More importantly, it eliminates the middle-man that previously came with traditional media channels, wherein the state exercised enormous power to regulate content. It is here that the Indian state has lost its grip, and is no longer the sole gatekeeper of information released to the public.

New videos emerge on a daily basis, of unarmed Kashmiri youth being subjected to extreme brute force by the Indian army and within a matter of hours become viral on the internet. The most recent video that drew outrage was of a young shawl weaver, Farooq Ahmad Dar, tied to the hood of an army jeep as it patrolled villages on voting day in the valley. The next morning, another video emerged showing Indian army soldiers beating men into raising anti-Pakistan slogans. These viral videos have met with anger, not only from within Kashmir, but also within India. Indian journalists, media persons and activists are increasingly raising their voice against the brutality on display, questioning the Modi government’s ‘Doval doctrine’ – a reference to the Indian government’s anti-insurgency approach predicated on crackdowns rather than engagement.

The already aggrieved and isolated Kashmiri youth remain brazenly charged in their struggle against the Indian state, and the social media ban is further vitiating unrest in the valley. Scores of Kashmiri youth continue to pour out in protest everyday against the violence and oppression of the Indian army, all accessible to the world through privately uploaded videos and photos on social media. Reacting to the inhumane mistreatment of Farooq Ahmad Dar, former Chief Minister Farooq Abdullah warns India, saying “The youth is on boil, which I have not seen before. You are losing Kashmir.”

With only a few days into the ban, Kashmir has already found its way back on social networks by using VPNs, seemingly unfazed and unwilling to back down. It is now up to the Indian state to respond carefully, perhaps this time around too with words vis-a-vis dialogue, as it treads a dangerous path, for it is directly in the public spotlight in both its purposive actions and in-actions, concealed only by the thin veil of social media ready to be exposed at the upload of a new video. As for the Kashmiri youth, they remain undeterred and will likely find alternative ways of resistance as we enter another summer of resistance; they certainly cannot be silenced.