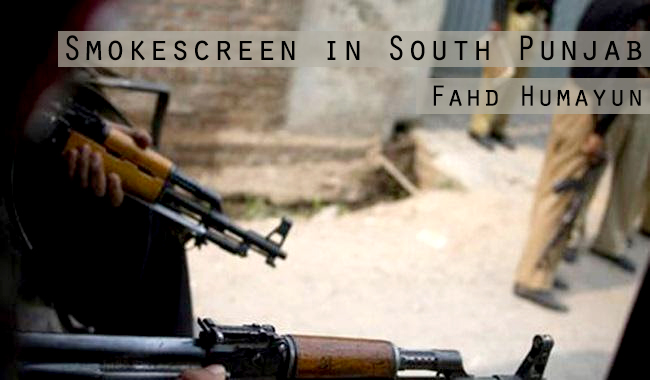 Back in May the Punjab Assembly unanimously carried a resolution hailing anti-terror operations in the province. On paper, the numbers look impressive: 10,000 intelligence-based operations have been carried out across Punjab since Lahore’s Easter Day bombing. The provincial Counter Terrorism Department (CTD) has arrested close to 1,200 militants, 650 facilitators and 80 clerics. In the Indus delta, a police operation was launched to target criminal gangs.

But behind the obvious successes, Punjab’s counterterrorism debate on what is do-able versus what is desirable at a policy level remains embedded in confusion and non-starters. No new groups, militant or otherwise, have been banned since the start of the year. The messily launched Rajanpur cleanup, targeting criminal gangs in the province’s tri-border southern tip, was palliative at best and delinked from Punjab’s bigger issue of militant-extremism. As far as smokescreens go, the deployment of 600 policemen did a good job of distracting from the mounting costs of political inertia vis-à-vis the twin threats still emanating from the plains: the extremist Jaish-e-Mohammad (JeM) and sectarian Lashkar-e-Jhangvi (LeJ).

Home to two governments, federal and provincial, Punjab was always going to be the mirror to the PML-N’s anti-terror resolve. But two problems have become immediately apparent in the state’s response to the Easter Day carnage in Lahore, the deadliest attack in Pakistan since Peshawar’s Army Public School. The first is that even after pledging to bring the war to Punjab, counterterror action against armed groups remains stymied by the selectivity of state application, with the provincial government’s piecemeal approach characterized most notably by a failure of collective action and inter-agency coordination. Lingering definitional gaps in the government’s CVE playbook raises important questions about the state’s intention and capacity to take the anti-terror fight to central and southern Punjab. The absence of any real follow-through after the swiftly registered FIR into the Pathankot attack and Joint Investigation Team sent to India is most visible in the obscurities surrounding Masood Azhar’s internment and current legal status. Other signs in the province are equally worrying, such as attempts to privatize justice through Jamaat-ud-Dawa-led Sharia courts, and the unchecked operations of the Falah-i-Insaniyat Foundation (FIF), a known front for the JuD that has been on a watch list since 2012.

A secondary problem lies in the penchant to rely on force and firepower in Punjab, and the default fallback on kinetic military action as a one-size-fits-all solution to a significantly more complex problem. The appropriation of hard force and scorched earth tactics from NWA to South Punjab, as seen in the execution of the Rajanpur operation and the indiscriminate use of army gunships against local criminals, put hundreds of civilian lives at risk while exposing the learning gaps between Zarb-e-Azb and urban counterterrorism. But given the disastrous police performance in Rajanpur and their eventual reliance on the Rangers, a general lack of readiness also means the police cannot be expected to go-it-alone just yet. Further efforts have to be made to build the capacity of CTD commandos, depoliticize police appointments, and enhance resources for effective counterterrorism campaigns. While clear linkages and sensibilities must be drawn between Zarb-e-Azb and South Punjab, i.e. progress in one must inform responses in the other, policy planners must understand that these will have to be two very different offensives, requiring fundamentally different strategies. Given South Punjab’s urban density and the diffusion of the militant threat here, the approach will have to be correspondingly measured and calibrated. Nor should CT planners expect ‘flash-in-the-pan’ successes of the Zarb-e-Azb variety.

Similarly problematic is the tendency to rely on extra-judicial killings, such as those targeting LeJ top-tier leadership last year. In the absence of both due process and a supporting grassroots operation to target the middle-class nurseries and university recruitment grounds flourishing across the province, militant networks are likely to remain fluid and amorphous, flushed with a reserve pool of volunteers subscribing to extremist leanings and ready to take up guns. To make the dots truly connect, Punjab will ultimately have to embrace an intelligence-guided CT strategy that can be backed by a smart mix of kinetic and non-kinetic operations. Close to 100 million SIMs are said to have been blocked in Punjab, but with many terrorists going digital and relying on cross-platform mobile messaging apps, LEAs will have to get creative in curbing the misappropriation of communication networks. And eventually, law and order in Punjab will have to rest on the state’s capacity to prosecute, and not just arrest, suspected militants. In some cases temporary detention is reported to be fuelling another problem: in-jail radicalization of other inmates. But eighteen months since the 21st Amendment, there has been little attempt to reform the criminal justice system or strengthen governance structures – two areas that can, in turn, shore up conviction rates.

With Operation Zarb-e-Azb entering its third year, the battle will now have to shift to the plains, particularly as the violence of Punjab-based militants becomes less geographically bound, and soft targets continue to be hit. In Punjab, the government has a clear choice to make: cede more space to the right enabling third-generation militant groups to retrench, or mete out an undifferentiated response to extremism and terrorism to reverse the jihadist tide. This will mean introducing a level playing field in the pursuit of militants, overturning poor conviction ratios, slashing funding drives, and disabling the extremist infrastructure that remains a ‘pull’ factor for young graduates. Equally, the federal and provincial government will have to pull their respective weights to engineer the requisite institutional consensus, through a Joint Operations Coordination Committee if necessary, to prompt an indiscriminate cleanup of South Punjab. This will be of paramount importance to prevent a repeat of the institutional tug-of-war that followed the Lahore attack. As further violence inside and outside the country originating from Punjab drives up the political costs of not taking action against jihadist groups, the government will eventually have to recognize that while this may not be the war Punjab wants, it is the war the country needs.