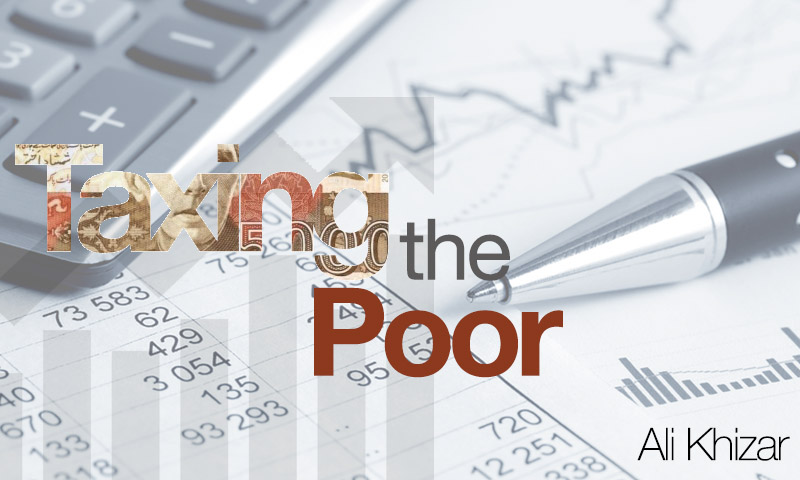 There is a worm at the heart of the Pakistan government’s strategy on enhancing tax revenue. The tax to GDP ratio in Pakistan continues to remain abysmally low and while the Pakistan Muslim League –Nawaz (PML-N) government’s focus on deepening tax revenues is good, the policy tools adopted remain deeply flawed. Instead of broadening the tax net by incorporating tax-exempted sectors into the policy mix, the easier solution of higher tax rates on existing tax base is being implemented. The focus, therefore, has largely remained on living off indirect taxes. The focus on non-progressive taxes is so heavy that even within direct taxes, there is sustained reliance on indirect methods.

This regressive taxation approach threatens to derail not just the goal of attaining sustainable economic growth but also enhances the tax burden on low income groups, leaving the poor more vulnerable. In the fiscal year (FY) 2016-17 alone, the setting up of a hefty revenue target of 17 percent growth without bringing new sectors in the tax net will increase the tax incidence on low income groups.

While it is commendable that FBR revenue in terms of GDP has increased from 8.8 percent in FY13 to 10.5 percent in FY16, and the ratio of total taxes (including provincial taxes) has improved better still, from 9.9 per cent in FY13 to 12.6 per cent in FY16. The tax base, though, continues to remain narrow. A handful of sources make up the bulk of taxes, including imports, oil and gas, banking, telecom and a few manufacturing sectors. On the flipside, agriculture, textile, power, retail trade and real estate contribute little to the tax base despite their large share in GDP.

So far, the incumbent government has done little to tax these sectors. The measures taken, if any, indirectly pass all impact to consumers. In the first budget presented by Finance Minister Ishaq Dar upon taking the helm at the ministry of finance, the sales tax was increased from 16 to 17 per cent while income tax was decreased from 35 to 30 per cent in a staggered manner. Although the latter may help the corporatization of businesses in Pakistan, compensating for lower income tax by higher sales tax is counterproductive.

The last four budgets have consistently focused on indirect taxes. While provinces have started applying sales tax on services, there is little or no focus on the larger profitable sectors falling in their ambit. The Federal Finance Ministry is considering penalizing non-filers by imposing higher taxes on them across the board, to incentivize their inclusion to the tax net and enhance documentation.  Concurrently, an amnesty scheme has also been announced to turn black money into white, drawing condemnation from opposition parties and the International Monetary Fund.

The convoluted policies to broaden the tax base and enhance documentation have proved to be counterproductive so far. In case of higher withholding taxes on non-filers, impact is mostly passed on to the consumers and businesses in the value chain. Documented businesses have to deal in cash, buy non-adjustable inputs from non-filers, and either absorb the impact themselves or pass it on to final consumers. The latter is mostly the case, and is inflationary in nature.

Under pressure of the IMF, new indirect taxes are imposed whenever federal government finds itself short of meeting the revenue target. The reasons FBR achieved high growth this year was the mini budget introduced in Oct 2015 to meet the shortfall of Rs40 billion in the first quarter. The increase in custom duties, federal excise duties and other import duties was cascaded by 17 percent GST on incremental duties. Despite the fact that indirect taxes aided the increase of revenue growth from 9 percent in the first quarter of FY16 to 19 per cent at the end of the year, the potential of economic growth was compromised in the process.

This skewed approach of merely targeting revenue targets from existing tax payers is a recipe for low growth and high inflation. For instance, the federal government is proposing to ban input tax adjustment against the federal sales tax claim, paid to provinces on services used by manufacturers in the value chain. In manufacturing, the total input of services is averaged at 30 per cent and input to output historic ratio is 60 per cent. With non-adjustment policies on 16 percent GST, the final price would increase by 3 percent, ultimately assuming the impact will be passed on to consumers.

Again, the FBR revenue target of 17 per cent is unrealistic. With nominal GDP growth of 13 per cent and historic tax elasticity of 0.9, the tax growth will be 12 per cent on the existing base. After incorporating net impact of new taxation, the gap in FBR revenues is estimated at Rs60 billion, which begs the question: is another mini budget in offing in mid FY17?

Apart from tax collection, there are other gaps in this year’s budget. Non-tax revenues may continue to shy away from target, subsidies are likely to overrun, and mark-up expenditure may overshoot. As such, Finance Minister Dar will have two options – either to let the fiscal deficit slip from the optimistic target of 3.8 percent of GDP and allow domestic banking sources to finance incremental deficit, or to impose new indirect taxes. Both options are inflationary in nature, though the chances of opting for the former are higher. The limited capacity of commercial banks may prompt the government to revert to central bank financing as the condition of zero net borrowing from the State Bank of Pakistan will no longer be effective after Pakistan exits the IMF programme. The days of State Bank financing government expenditures may soon be back in action, with the public-at-large paying inflationary tax in the coming years unless a more progressive and growth driven tax structure is not implemented soon. So far, it’s business as usual at the Finance Ministry.

The writer is Head of Research at Business Recorder.