The Promise Of 29 February 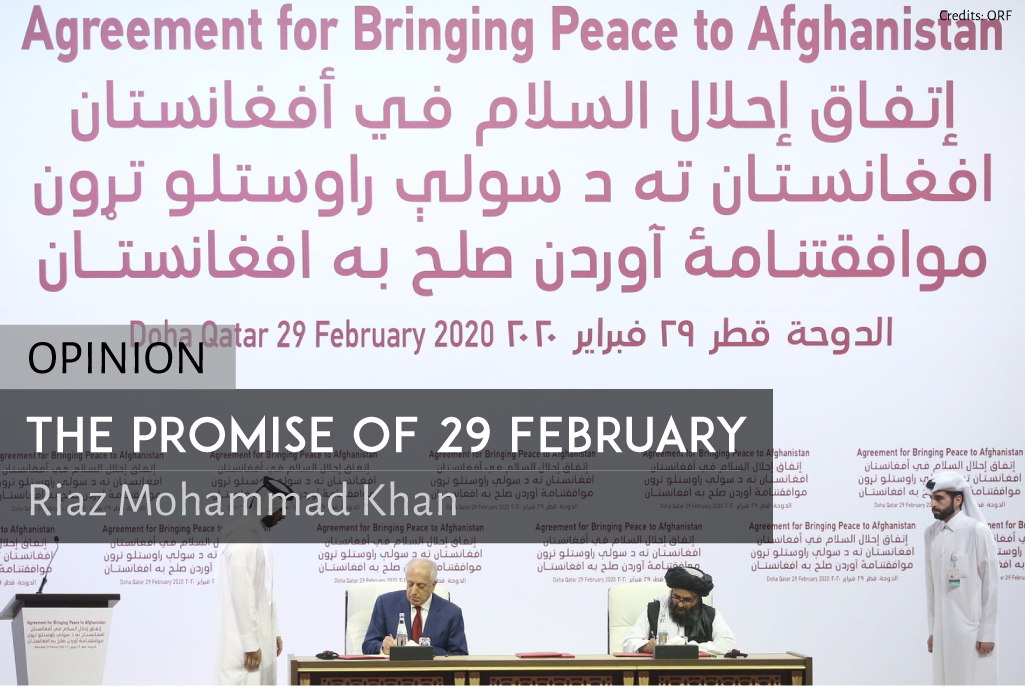 The 29 February Agreement may well set in motion a process bringing peace to Afghanistan and an end to America’s longest war. The agreement marks a formal reversal of the wrong committed in early 2002 when a triumphant United States chose to lump the Afghan Taliban together with Al Qaeda even though the Taliban were not responsible for 9/11 and, by any measure, were integral part of the Afghan political landscape. The 29 February agreement can be a beginning for peace. But an uncharted course lies ahead, and this positive development can turn out to be a false dawn. We are reminded of the disappointment in the wake of the earlier promising junctures in the turbulent history of the Afghan conflict, such as the Soviet withdrawal (1989), the Peshawar Accords (1992) and the Bonn agreement (2002). The challenges ahead call for circumspection.

The elements of the agreement are public, most importantly the US commitment to reduce troop strength to 8600 within 135 days and to effect complete withdrawal in fourteen months, while the Taliban have agreed to stop attacks against US troops, reduce violence and prevent use of Afghan soil by any group or individual (read Al Qaeda or ISIS) against the security of the United States or its allies. The next major step is the start of an intra-Afghan dialogue for a workable political dispensation.

The difficulties cannot be over-estimated. Afghanistan is fragmented at many levels, ethnic, sectarian, ideological and political. It is imperative that violence remains contained and Afghanistan does not relapse into a new cycle of conflict. Outside interests are at odds with each other despite the clichéd positions of all major players to work for peace and stability in Afghanistan.

Paradoxically, the Taliban acquiescence to a continued residual US military presence even if for a limited period may dampen Taliban temptation to takeover Kabul or grab territory which could reignite civil war. Similar contradiction is apparent in the opinion that constant fighting sustains the motivation of the Taliban rank and file and holds them together. On the other hand, there is equally strong speculation that powerful elements within Kabul are apprehensive about the exit of US forces and would manoeuvre to derail the agreement.

These uncertainties apart, the 29 February agreement may instil a change and confidence in the behaviour of the Taliban and a fresh realism in the attitude of those who are part of the government in Kabul.  Hopefully, fatigue with four decades of war and suffering, the ring of optimism in the air evident at the Doha signing ceremony and restraint and a degree of positivity on the part of most of the domestic and external players, may sustain movement in the right direction.

Like any dialogue, the expected intra-Afghan dialogue will have to address questions of format and substance. Both aspects are beset with imponderables. Even if the Afghan factions are able to agree on an inclusive single format, the multiple forums such as the Moscow Format and Beijing Quadrilateral Contact Group can be helpful. It is however essential that external players desist from pushing narrow interests and allow enough space for the Afghans to work out their differences. Afghans left to themselves have a better chance of success.

The recent Ghani-Abdullah split in Kabul over elections should not be a hurdle to instituting intra-Afghan dialogue if the dialogue is meant to be inclusive and neither the government nor any other faction is to attempt an overweening push for its agenda. However, the split poses a test for American diplomacy to dissuade its squabbling allies from obstructing the process.

On substance, the dialogue will need to address seemingly intractable issues relating to the constitution, local control of territories, and to the structure and role of the Afghan National Army (ANA). This is a tall order for the shaping of a new acceptable political dispensation. The best hope is that all factions will accord de facto legitimacy to ground realities. The Taliban will retain and consolidate control in their areas of influence in the South West and South East of Afghanistan much like warlords exercise authority in the rest of the country. Kabul could have a Bonn Accords-like political arrangement with Taliban participation and corresponding attenuation of ANA and intelligence hold over the city. The path to the needed adjustments is strewn with minefields.

The Afghan National Army including the security structure in Kabul is sustained by American funding and backing. If as expected American military foot print shrinks, the American support for ANA will diminish. Furthermore, any American effort to strengthen ANA for operations especially in the Taliban areas will militate against the declared US interest in reduction of violence. Thus the role of ANA in any peace scenario will be far more limited than that envisaged under the Bonn Accords.

Fears about losing the social gains in particular women and minority rights, may turn out to be overdrawn. Afghanistan has changed a great deal in the last two decades. The urban population has expanded and undergone socio-economic change. It will resist any attempt at reversal. The Taliban have also changed. They are no longer the antiquated madrassa-primed rural disadvantaged lot of the 1990s, but have been exposed to development and life in mega cities.

During the transition period spanning the intra-Afghan dialogue which may turn out to be protracted, the role of major powers including Russia and China as well as of the neighbours and near neighbours will be benign as long as it remains limited to facilitation rather than meddling. If Afghanistan settles, they can all make an important contribution towards reconstruction and development.

The agreement validates the much maligned Pakistan position on the Afghan Taliban. Our policy must now proceed with confidence that nothing can offset the unique relationship grounded in common geography and population overlap. Pakistan has an inbuilt role in helping the peace process. But pushing for it will provoke suspicions, we should play it prudently and responsively as needed. We must not let our policy fall into the Afghan ethnic divide or into taking sides. Peace will contain Indian capacity for mischief. Peace and stability in Afghanistan alone safeguards our interests and can open up opportunities long denied to us by the Afghan conflict.

The writer is an author and former foreign secretary