The Rise of Vigilantism 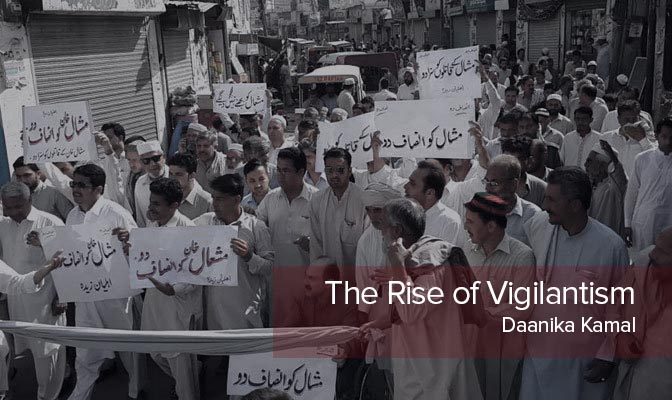 Ten days and three acts of vigilantism – the murder of Mashal Khan in Mardan, three burqa clad sisters gunning down a man accused of blasphemy in Sialkot, and Shehbaz shooting three friends on the assumption that one of them was romancing his sister in Rawalpindi.

This climate of vigilantism isn’t new. It is a reflection of the displacement of culpability by the state, which blames people for taking law into their own hands, and by citizens, who justify their actions on state inaction. Whether localized or spontaneous, vigilante killings are far from recent. The assassination of Salman Taseer, murder of Aabid Mehmood, fishing expedition of Asia Bibi, honour-killing of Qandeel Baloch and the mob ‘justice’ of Mashal Khan are only a handful of cases which have been brought to the limelight. In each case, the killers’ were motivated by the mindset that it was their ‘duty’ to remove those they believed had off-set the morality discourse in society.

The mob that witnessed and participated in Mashal’s death was brainwashed using new media platforms. By reaffirming one another’s beliefs on social media, their moral conscience allowed them to watch a young man be tortured to death, and subsequently take a vow of silence. In their minds, they were just being vigilant.

As a society, our first mistake is attempting to justify vigilantism as vigilance. Culprits of heinous crimes like Mashal’s murder often find refuge in the abuse of our laws, blasphemy or otherwise, to find justification for what they perceive to be vigilance. The burqa avengers held a grudge against a man accused of blasphemy 13 years prior and executed a premeditated plan to eliminate him. Their defense? They were vigilant – they served ‘instant’ justice to a man that our Courts were unable to.

In such cases, society forgets that the reason law is meant to be defended is because the requirement of intent and burden of proof allows for an impartial conclusion of guilt. Attempting to punish alleged criminals based on one’s own policing of ‘morality,’ without involving the law is not filling a gap in the justice system. Rather, it is using loopholes in implementation for self-serving ‘heroic’ rhetoric.

Vigilante killings can be attributed to two longstanding problems – the state’s inadequate response to societal disorder, and its inability to aggressively prosecute those involved in vigilante killings. The Courts infamous tactics to feast on technicalities, suppressing evidence or using their discretion to determine liability tend to undermine the criminal justice system’s credibility. Political authority, religious discourse and implementation weaknesses’ challenge the Courts ability to harness forces of social influence and societal norms into crime-control instruments.

These structural shortcomings are further challenged by an upsurge in access to new media. The internet has the ability to immediately circulate both information and misinformation. This web of internet access, often shrouded behind the veil of anonymous social media handles, has enabled self-justified internet vigilantes to incite hatred and violence that more often than not translate into physical, calculated attacks.

The gap between the pace at which society verifies information and the pace at which information is shared using new media platforms is where vigilantism finds refuge. Social media users fuel their pedals with vigilance, as they race against traditional media to break news, shed light on criminal activity, and flaunt conspiracy theories.

Society’s second mistake is staying quiet. Vigilantism blurs the concept of guilt and innocence and escapes any easy definition of moral culpability. Authorities and law-abiding citizens are allowing it to fester nation-wide for fear of being caught in the cross-fire. It is common to opt out of speaking against these acts, in case their words are construed as being supportive of ‘criminals’. Courts are either reluctant to try vigilantes if the nature of their act is premised on religious or moral controversies, or engage in prosecutorial overcharging in attempt to make up for past judicial failures.

Vigilantes pick and choose aspects of legislation which serve their purpose. By picking the criminal act and the corresponding punishment for that act, they take it upon themselves to bypass the implementing procedures that allow one to proceed from ‘criminal act’ to ‘punishment’.  It has become a convenient tool to silence political and intellectual dissent.

Mashal Khan was accused of posting blasphemous content on social media defaming Islam. He was stripped naked, beaten and tortured by a violent mob which ultimately led to his death. Investigations found no concrete evidence to register a case of blasphemy or launch legal action against Mashal.

The vigilante’s tried to prove Mashal’s guilt after his death by fabricating evidence, abusing the very law they claimed to defend.