Things Fall Apart: The Politics of US Aid to Pakistan 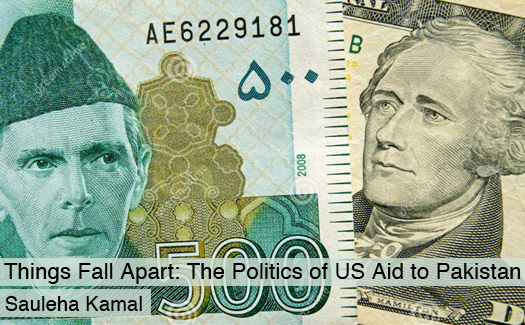 In a clear case of déjà vu, the United States has blocked $300 million in military aid to Pakistan, making the release of the funds contingent on Islamabad taking demonstrable steps against the Haqqani network.This announcement follows a steady downturn in Pakistan-US relations that comes just as the relationship finally seemed to be recovering. A succession of events that started with vitriolic US Senate debates over the sale of F-16s to Pakistan, culminated in a drone strike in Balochistan on May 21 that killed Taliban leader Mullah Mansour, setting back bilateral relations significantly. On May 28,Pakistan missed the Letter of Acceptance deadline for the now-expired F-16 deal, thus closing the door on any further negotiations. Back with the dated script is another instance of unilateral military action on Pakistani soil, accusations of sheltering terrorists,and debates over sovereignty. Even within Pakistan, questions are being asked about the ease with which Mullah Mansour was able to travel from Iran and transit through Balochistan.

To say that there is resentment on both sides would be an understatement. That this resentment is insurmountable is still questionable. The grievances on either side are markedly different.

The American narrative often sees Pakistan as an impediment to desired counterterrorism outcomes. In the face of irritants such as the Haqqani Network, the F-16 issue in light of relations with India, and concerns over China’s growing prowess in the region, US policymakers and pundits are losing trust in Pakistan and,once again,throwing around phrases such as “double game” and “duplicitous”.

But from Islamabad, the view is very different. Here, the country is caught in the middle of a complex war. Even as Pakistan single handedly fights the largest land war against terrorism in modern history and images of dead school children dominate headlines, spillover from the US-led war in Afghanistan remains a potent security concern. After having sustained a strategic partnership with the US since the 1960s, it is not unwarranted for Pakistan to expect support from its ally as the $1.9 billion cost of Zarb-e-Azb and the mounting rehabilitation costs of over 400,000 Internally Displaced Persons (IDPs) quickly overshadow the Coalition Support Fund (CSF) payments received since the operation was launched. That even these reimbursements are dwindling is not lost on Pakistan. In this climate of mistrust, Congress’ refusal to partially finance the $699 million F-16 deal through the US Foreign Military Financing (FMF) programme, as per the initial agreement, has struck a fresh blow to relations. This notwithstanding the added injury of US policymakers’increased responsiveness to Indian concerns and elevated US defence relations with India.

Even as the strategic imbalance in South Asia continues to disadvantage Pakistan, failures in Afghanistan are offloaded onto Pakistan’s doorstep. With the Afghan Taliban unwilling to negotiate, there is a tendency for the international community, in general, and Washington, in particular, to assume Pakistan is either unreliable or incompetent as a partner against the insurgency, an impression made clear by the unilateral airstrike in Balochistan and the decision to inform Pakistan after the fact. That the ground reality is much more complex matters little. For a Capitol Hill pushing budget cuts and convinced that the conflict in Afghanistan is Pakistan’s mess to clean up, cutting financial assistance is the clear answer.

It is no secret that US involvement with Pakistan has been tied to its interests in Afghanistan for the last decade and a half.About half of all US aid to Pakistan since 2002 has come in the form of CSF payments, reimbursement for expenses incurred in support of US operations in Afghanistan.So far, Pakistan has received about $13 billion in CSF payments; these payments have fallen from around $1 billion per year in 2014 to $700 million in 2015. Other security-related assistance has steadily fallen as well, from $1.2 billion in 2011 to around $300 million today. Despite this, military aid still towers over economic assistance—as has largely been the case since the 1979 Soviet invasion of Afghanistan—which has been stuck at around $500 million per year in recent years.

Though security-related assistance, including CSF payments, may be characterized as aid, they are not exactly that, as the money is received in exchange for Pakistani support to the US-led war in Afghanistan. That it can be, and has been, made contingent on outcomes desired by the United States, reinforces this notion. As such, parliamentary voices in Pakistan look at it more as a quid pro quo arrangement than a favour, and are quick to recall how US military assistance has helped empower Pakistani armed forces against civilian governments in the past.

Non-military US aid to Pakistan, meanwhile, is meant to support development, cooperation and reform in the five key areas of energy, economic growth, stabilisation of areas most vulnerable to extremism, education, and health. Indeed, programmes run through USAID for emergency humanitarian response, power generation, literacy and maternal health, as well as higher education initiatives such as the Fulbright have been well-received. US economic assistance and cultural exchange initiatives have gone a long way in correcting misinterpretations on both sides but their role is constantly overshadowed and undermined by the security-related problems that plague the bilateral relationship.

As the Pakistani economy falls short of meeting growth targets and the well of US aid dries up, Islamabad looks to cement alternative alliances, this time turning an eye to its neighbourhood. With many pointing to the $46 billion China-Pakistan Economic Corridor as a golden opportunity to rejuvenate a stagnated economy, the “all-weather” Pakistan-China friendship grows stronger notwithstanding complications within the China-US-India dynamic. Meanwhile,such projects as the $2 billion North-South gas pipeline with Russia,the Iran-Pakistan gas pipeline, Turkmenistan-Afghanistan-Pakistan-India Pipeline (TAPI) and Central Asia South Asia 1000 (CASA-1000)promise greater cooperation within the region. As Pakistan moves towards regional integration with these trade and energy-related partnerships, there is cooperation on the defence front as well, with arms deals and joint training exercises underway with China,and talks on helicopter, air defence system and tank sales ongoing with Russia. Even so, the Pakistan-US relationship remains paramount to achieving regional and domestic objectives.

If the Pakistan-US relationship is to survive in the long run, the mutual trust deficit cannot be swept under the rug for interminable lengths of time. For Pakistan, this means moving towards greater self-reliance and evolving its foreign policy beyond the transactional. For the United States, it means moving away from solely militaristic partnerships, extending consistent support to strengthening democratic governments in Pakistan and helping the country achieve development goals. This would be beneficial to the interests of both players as well as to the maintenance of stability in the region. The alternative i.e. further polarisation, on the strategic and economic fronts, in a part of the world perpetually haunted by the spectre of conflict, would be singularly unhelpful.

Sauleha Kamal is Project Officer, SSI at Jinnah Institute. She tweets @Sauliloquy1 A version of this article appeared in Express Tribune on 11/06/2016.