Who to Listen to on the Indus Treaty? 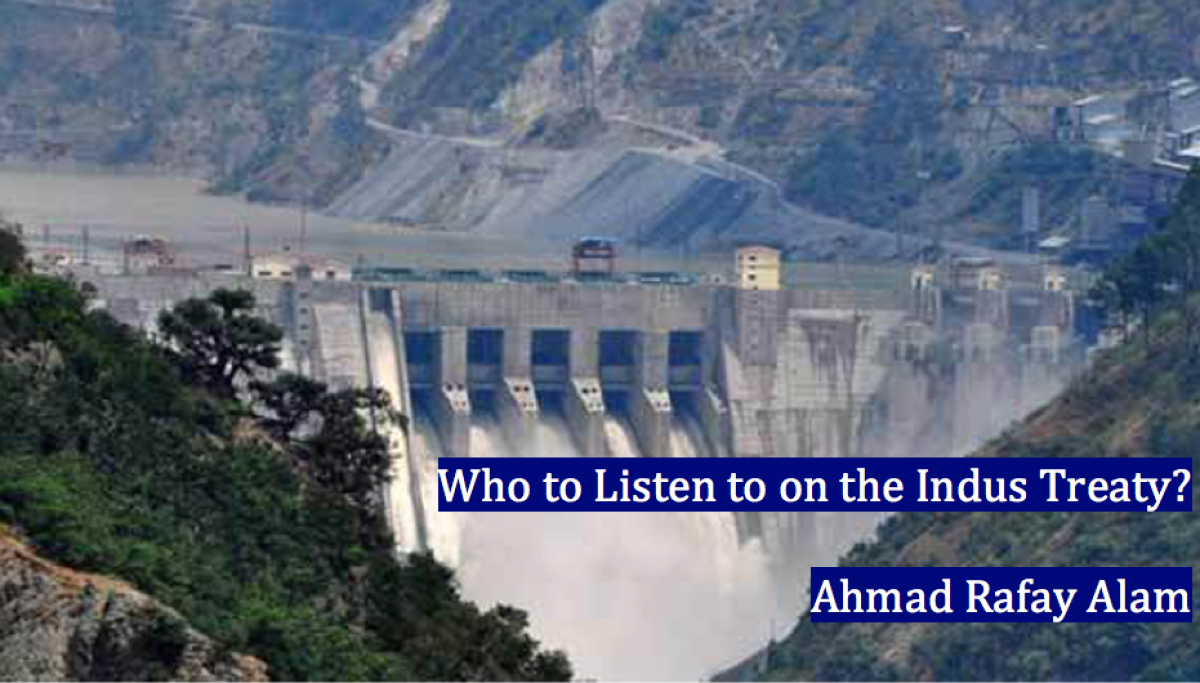 The World Bank earlier this week requested Pakistan to accept India’s referral to a Neutral Expert questions involving the design of the Kishanganga and Ratle dams.  This is the latest twist in the life of the Indus Waters Treaty, 1960.

Pakistan had formally requested India in August 2016 to settle disputes on the two dams by establishing a Court of Arbitration.  India responded in October 2016 by requesting the appointment of a Neutral Expert instead.  The impasse on choice of adjudicatory forums envisioned in the Treaty led the Bank to pause Treaty proceedings in December 2016.  India resumed Treaty talks with Pakistan – suspended after it alleged Pakistan masterminded the Uri attacks of 2016– in March 2017, but only after it came to light the Uri attackers were, in fact, not Pakistani.

The impasse over forum has persisted with no resolution as to whether issues with respect to Kishanganga and Ratle were differences or disputes, and consequently to be addressed either by an NE or CoA under the terms of the Treaty.

So what exactly is the Bank’s role with respect to the Treaty?  Can it call for pauses, or refuse a Party to the Treaty’s request to resolve its disputes with the other?  Is Pakistan bound by the Bank’s directions or instructions?

It is well-known the Treaty is a tripartite agreement signed by Pakistan, India and the Bank.  However, the Treaty stipulates that the Bank’s role is limited to the purposes specified in its Articles V and X and and in its Annexures F, G and H.

Article V “Financial Provision” deals with India’s contribution to Pakistan of GBP 62 million for replacement works Pakistan would construct as a result of the allocation of the Indus’ three eastern tributaries to India and of Pakistan’s relinquishment of rights in their water.  Here, the Bank was to manage the Indus Basin Development Fund for construction of replacement works, which included eight link canals, the Tarbela and Mangla storage dams and 2,500 tubewells.  Article X “Emergency Provisions” sets out the Bank’s responsibilities if any large scale international hostilities prevented Pakistan from obtain necessary construction materials and equipment from abroad.  Annexure H “Transitional Arrangements” relates to Pakistan’s construction of replacement works between 1960 and 1970.  The Bank’s role under its Article V and X and its Annexure H were completed in the previous century.

Annexures F and G relate to Neutral Expert and Court of Arbitration, the two forums of adjudication provided for under the Treaty’s Article IX “Settlement of Differences and Disputes”.  Annex F provides for either the Indian or Pakistani Indus Waters Commissioner to refer one of 23 questions to an NE.  An NE is to be appointed jointly by India and Pakistan.  If they can’t agree, then the Bank is to appoint the NE.  The Bank’s responsibilities include paying the NE remuneration collected from the parties.

Annex G provides a CoA may be constituted by India and Pakistan agreeing to refer specific questions in dispute, or by either of them requesting a CoA after negotiations attempting to settle a dispute by agreement are unduly delayed.  A CoA is to consist of seven arbitrators appointed through a complex process that, if the parties fail to follow themselves, could involve the Bank.

The dispute resolution process under the Treaty has been activated twice.  Firstly in 2007, when a NE appointed to adjudicate differences in relation to Baglihar dam rejected Pakistan’s argument that India violated its Treaty obligation to “let flow” the waters of the Indus and two of its Western tributaries and held the dam’s gated spillways for drawdown flushing were required given the conditions of the site, its hydrology and sediment yield etc.

Secondly in 2013, when a CoA adjudicating disputes in relation to the Kishanganga dam observed the Treaty gave no indication that an NE’s determination created a precedent.  The award of the Kishanganga proceedings further clarified that CoA decisions would be binding on subsequent adjudications under the Treaty.  This, in effect, restricts the impacts of the Baglihar decision to its own facts.  The CoA also held drawdown flushing would in all probability not comply with the Treaty; that India’s right to generate hydroelectric power on the Western rivers could be exercised without drawdown flushing; and that this decision would extend to other, future, run-of-the-river dams planned by India.

The NE and CoA are not hierarchical forums.  If technical questions on the design of a dam fall within ones identified in Annexure F of the Treaty, then they are for an NE to decide.  However, in the Kishanganga matter, it was held that recourse to the NE was expressed in permissive terms only and nothing in the Treaty could restrict a CoA from adjudicating the same technical questions itself.

Pakistan must see through the ruse of India’s insistence that differences on the Kishanganga and Ratle projects be referred to a NE.  Recall India’s reference to an NE was after and in response to Pakistan’s earlier call to establish a CoA.  An NE is the only forum where India could find a sympathetic ear for its dams’ spillway designs.  Pakistan’s invocation of Treaty terms to establish a CoA rests on firm legal foundations.

Pakistan should not be distracted from its negotiation position by Indian political strategy or the Bank’s recent request for Pakistan to appoint an NE. The Bank is not a “guarantor” under the Treaty.  It does not act as an enforcer of its provisions.  It has merely a limited procedural role in the appointment of an NE or CoA.  The Bank should respect that Pakistan requested the establishment of a CoA earlier in time, and that the technical questions sought to be adjudicated can be addressed by a CoA.

But the Bank has considerable investments – and influence – in Pakistan.  It must not be allowed to influence Pakistan’s position.  By keeping the Bank’s role limited, Pakistan can avoid the Bank employing its influence to determine the course or outcome of future decisions of the Commission.  And, in any case, if the Bank ever intervened in a dispute between its clients, whose interests would one expect it to champion?

Ahmad Rafay Alam is an environment lawyer and Partner at Saleem, Alam & Co.  He tweets at @rafay_alam