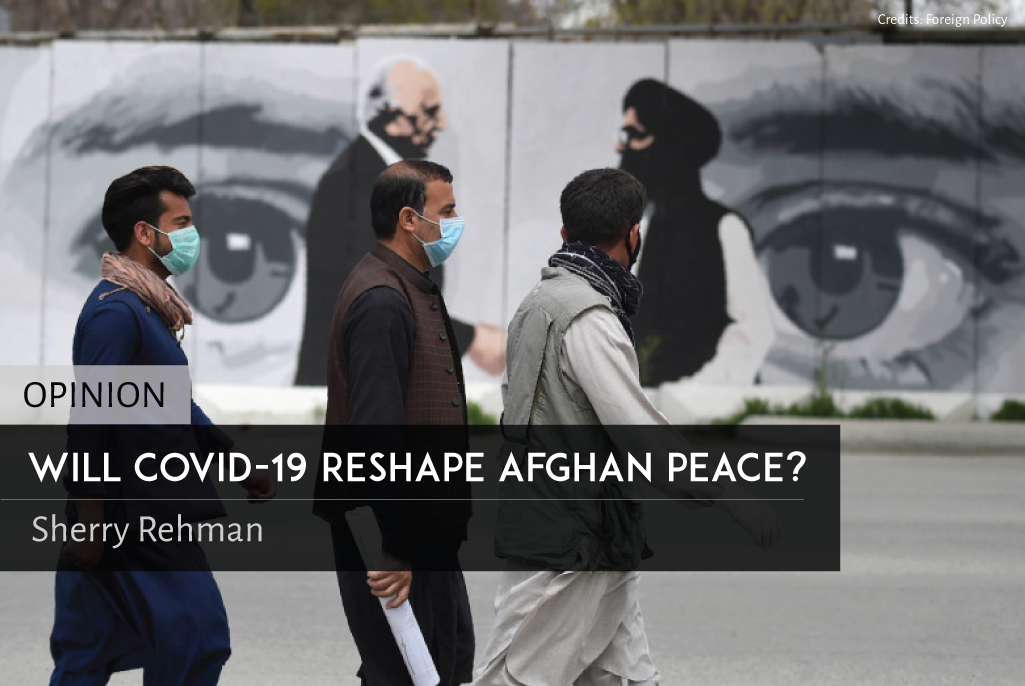 Pandemics have a way of sharpening existing social trends and political faultlines. As the Covid-19 virus sows its deadly harvest both in Pakistan and South-Central Asia, the prospect of renewed regional volatility hangs in the balance.

Afghanistan is a classic case in point. While the US has invested billions in building public capital as well as infrastructure there over 18 years, the peace deal that could end this war now teeters on the edge of a fresh precipice. The Covid-19 pandemic carries the potential of a humanitarian catastrophe in Afghanistan.

Afghanistan’s health ministry estimates are extremely worrying. If containment protocols are not enforced, the ministry anticipates infections in staggering proportions, predicting 110,00 deaths. If the infection follows their model, this will mean that more Afghan civilians will have died from the pandemic than from the entire duration of the war.

As the violence escalates in Afghanistan, questions about state fragility loom large. News from the trenches is ominous. The kinetic face-off between Taliban forces and NATO has spiraled up to public warnings of reprisals, and the space for an inclusive peace hovers perilously between the advance of the virus, the battlefield dynamic and Afghanistan’s fractious politics.

Given that the scale and breadth of the calamity in war-torn Afghanistan is acute, the virus is expected to likely intensify instability as the prospects and shape of a potential peace-deal wavers in uncharted territory. As it stands, even without the pandemic, the politics of the deal itself had pivoted peace on the rocks of a stalemate that tipped the scales towards the Taliban. Since the deal was signed on February 29, 2020, not in a year when the Taliban did not have the field advantage, hope has barely triumphed over the facts. Latest reports suggest that the Taliban have intensified their attacks to an average of 55 a day, which is unexpected for Ramazan.

The current escalation in violence suggests deeper distrust issues at play than just disagreements on prisoner-exchange with Kabul and Washington. Instead of a ceasefire, driven usually by Ramazan, the politics of powering through the pause or breakdown in talks is still cloaked in the fog of war.

Key obstacles in the way of peace pre-date the pandemic. Yet, if there is one thing Covid-19 may have impacted positively, it is the imperative for Afghan political leadership to publicly stop their internecine bickering while a tidal wave of human calamity hits the war-ravaged country. While the virus may not have been the reason for the feuding palaces in Kabul to have called for a fragile truce, it has certainly snuffed out space for power jockeying while it burns through Afghanistan’s potential political and economic futures. Either way, hope for former chief executive, Abdullah Abdullah and President Ashraf Ghani to strike a bargain is in the air, which will be a big win for the peace deal if it comes through.

An ongoing challenge to a sustainable peace will of course be Washington’s stamina. The onset of Covid-19 has triggered in many Washington circles, fresh incentives for American forces to ramp-down on an accelerated timeline. Except for the Taliban, who see gains accruing from battlefield engagement, peace interlocutors on every side are holding their breath in the hope that no precipitate decisions are made.

If an American drawdown gathers momentum, the scale of Afghanistan fatigue in DC will spill over to decision-makers that see only American priorities on the resource-pyramid after the Covid crisis. This will impact a number of pins holding the model of the current peace-deal together.

Money is one of them. US Secretary Pompeo’s announced aid cuts to Afghanistan won’t help. The Afghan economy itself will need more economic support to fight the humanitarian catastrophe in the making, and absent even a percentage of the 90 percent lifeline aid provided by the US to the Afghan National Security Forces, the balance of forces between Kabul and the Taliban will totally change. On a structural level too Afghanistan will continue to rely heavily on international aid to maintain core state functions, and Covid-diversions could impact both the patronage needed for peace bargains as well as country goals.

Unfortunately, the one cash crop that will potentially survive Covid-19 in Afghanistan is poppy, with implications for both trafficking and infection. Yet, while migrations from that rotating harvest will pose risks to transmissions within Afghanistan, worse than that will be the transmission risk from Afghan migrants returning from Iran or those that spark conflict with Tehran while trying to break border quarantines into Iran for jobs, which is one of the world’s hardest hit nations.

Infections within Afghanistan may go up, as border supervision is still fragile, and in turn impact both peace within the country, as well as Pakistan via refugees coming back to Pakistan for healthcare and jobs via informal routes. As it stands, Pakistan continues to provide for refugee families while its own economy reels under enormous strain.

For now, the fact that NATO command in Afghanistan is not disclosing any more data on Taliban attacks is only one good side of the news coin, because they are hoping to save the peace deal. The bad news is that, despite arrests of its leadership, IS-Khorasan (Daesh Afghanistan) has resumed attacks within reach of Kabul, while news of more Covid-19 cases surface from provinces like Badakhshan and Balkh where violence has seen a sharp uptick after winter. At the same time, the onset of summer may see a new crop of young fighters with less stakes in the peace talks, as risk of Covid-infections in older warriors with connections to the Doha process may slow some down.

While Pakistan has repeatedly opened the border at Torkham for hundreds to go home for the summer, videos of such movements show Afghans rushing past what should be health protocols on their side of the border. Low infection rates being cited all over the region may just be the invisible tip of an untested caseload pyramid, in cultures where social stigma of disease is as high as the impulse to meet, pray, live communally. As Kabul prepares to release 10,000 inmates to slow down contagion in crowded jails, these prisoner releases may lessen the impact of the transmission in Afghan jails, but the capacity to test or track, let alone quarantine such prisoners once out in communities is sorely going to be tested.

For Pakistan, an unstable Afghanistan is cause for worry. Afghan sovereignty and sustainability is a goal that Islamabad has begun banking on for the last ten years or more.

As the virus hits the poor disproportionately all over the region, peace will become a necessity for the most vulnerable. Slivers of hope do re-emerge when Taliban leaders allow Red Cross passage or meet government health workers like they did on April 13 in Faryab to coordinate responses to the epidemic. But a pattern where Taliban leadership sees optimal advantage in working with Kabul in order to seize legitimacy is yet to be seen.

Now would be a good time to build humanitarian bridges for both the Taliban and the Afghan government, but rational decision-making remains a casualty of political competition in the South-Central Asian region.