Will the Pandemic Bring Peace? 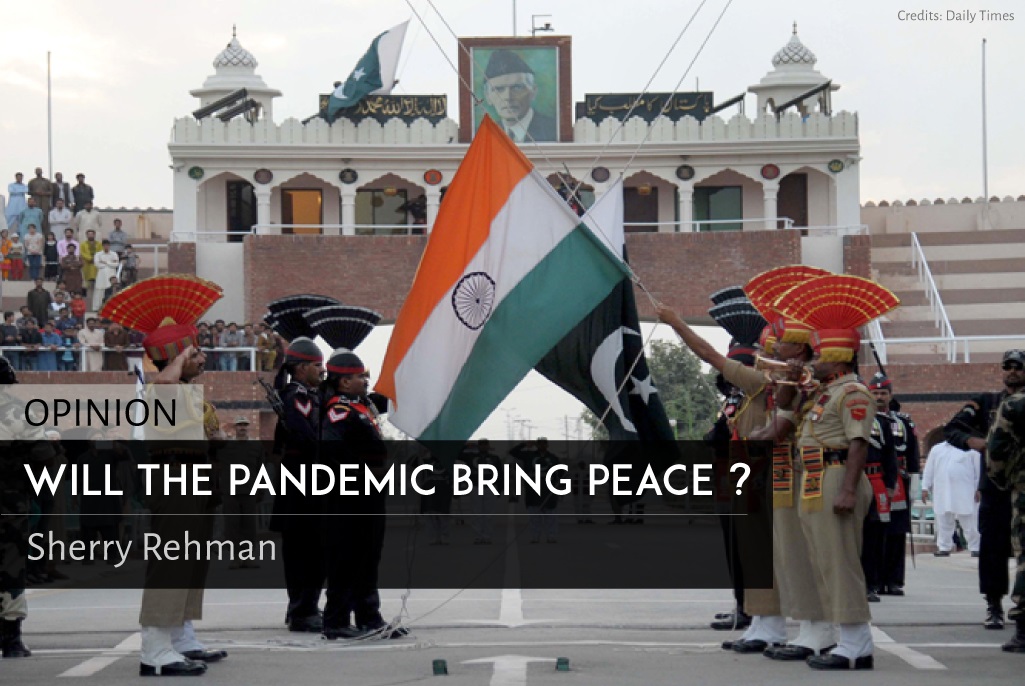 A global pandemic that moves with lightning speed to spread its deadly payload across borders, communities and class, demands a reconsideration at many levels. Even as we struggle to shape rapid responses to the crisis, a tiny protein molecule is re-shaping the world that we knew.

In this moment of epochal challenge, it is important to question fundamental choices that put us at risk, while looking at broader faultlines that caught us so badly unprepared. As countries lock down borders to fight the transmission rate, which they must do in a series of first-responses to suppress, contain and mitigate, an opportunity to review the 21st-century retreat from multilateralism has obviously arisen. What about South Asia, with its creaky infrastructure, big populations and cramped cities and water-starved ecology?

When rich, developed countries like the US struggle to cope with epicenter numbers, policy leaders in the two nuclear countries of South Asia need to reassess strategic priorities. Regional competition and the failure of markets to distribute resources or to provide public goods such as health services is teaching global leaders harsh lessons in social justice and the wages of growing inequality. We must learn them too.

Given sobering limits on our ability to map the viral spread or screen numbers, Pakistan is clearly at a growing trajectory of risk, like other nations of South Asia, which are connected by a huge youth demographic, acute climate stress and social support systems that are poised at the edge of a breakdown. At this point of time, early suppression in South Asia could save approximately five million lives, but if we cross the mark and carry on with poor mitigation, our region could see 7.5 million deaths over the next eight months. The social and economic costs will be very high in South Asia, where the daily wage-earner and small entrepreneur is acutely vulnerable to economic lockdowns, so the choices are doubly difficult. The choices are only actually between contained bush fires or one big raging, forest fire.

With unpredictability as the new normal India and Pakistan, given their wide-ranging HDI and climate risks, both must return to thinking of themselves as a region before they take the sovereignty straitjacket as their only policy framework. First, like all natural disasters, pandemics like this one should delegitimize the science-denialist politics of ultra-nationalism. Current calculations point to 30,000 deaths in India by end of May, (according to The Print). Pakistan may do no better. The UN, in fact, has put Pakistan at the centre of many dangers as lack of testing-capacity compounds systemic and structural problems.

In these two countries, particularly India, the politics of populism has done much damage. If left-of-centre opposition parties in India and Pakistan have been accused of lending to the long-term governance rot, then what have the new illiberal democracies done to address emerging crises? In Pakistan, Sindh under the PPP has demonstrated clear and visible leadership in making tough decisions by not positing the false choice of lives-versus-livelihoods in a dangerously confused policy mix. In India, in Kerala the state government ruled by the Communist Party (M) is known to be handling the crisis with more empathy and efficiency than Delhi. Modi has woken up late to curbing the transmission burn rate of Covid-19, but has thrown up huge social exclusions in his lockdown applications. None of these holds the promise of early containment of the pandemic, unfortunately.

Despite the systematic dismemberment of Saarc by India, done only to foil Pakistan’s membership, Modi’s sudden operationalization of Saarc has been one step to which Islamabad still responded. And for Pakistan, populist government or not, an invitation to peace remains a prospect rarely ignored. Once the pandemic flattens its transmission curve, will India think rationally about the future, or continue its rash trajectory to deepening conflict? Responses will tell us if mortality and morbidity emerge as first policy priorities or old-school muscle-flexing.

If Covid-19 deaths remove the denialism blindfold on the transformational value of cooperation lost in conflict, the two nuclear neighbours can agree to a calibrated lowering of tensions, which include steps on Kashmir, where thousands suffer a double-burden of security-curfew trauma as well as coronavirus shocks. The Siachen glacier, which has the dubious distinction of being the highest altitude battlefield in the world, remains a surreal low-news reminder of how both India and Pakistan continue to lose soldiers’ lives from temperatures, not bullets. What the indication of flexibility by New Delhi on Kashmir may do is improve confidence levels in dialogue between two neighbours whose conflict has held back any regional dividends of economic growth, energy connectivity, trade optimization to reduce poverty, climate cooperation on water, air and carbon negotiations at all forums.

A whole set of policy priorities already jostle at the table of collective human, food and water security. An alternate future could be ours for the taking. One urgent problem Saarc states could address collectively, after sharing emergency resources, is a discussion on health spending as percentage of GDP, and the opening of visa regimes to health tourism.

Right now, Pakistan and India face first-response gaps on mobilizing emergency services, with Pakistan spending less than one percent of GDP on healthcare, and India less than two percent. Even in the direct context of Covid-19, where access to clean water is the first frontline in the fight against the virus, the two face formidable challenges. Unicef’s WASH program says that between 68 and 84 percent of water sources in South Asia are contaminated. Salinity and arsenic affects 60 percent of the underground supply water across the Indo-Gangetic basin. In Pakistan, where multidimensional poverty runs higher than 40 percent, and 60 percent are food insecure, the task of providing clean water and nutrition to an exposed population is going to be very tough. Much of the same applies to India, where two-thirds live in poverty, and even without a pandemic to hit crisis buttons, by 2030 half the population of India will not have access to drinking water.

Economic recovery from the pandemic will be a global problem, with a dollar tag of $2.7 trillion, and recession will only be one of the fallouts. The ADB predicts that the outbreak will cost India losses ranging from $387 million to $29.9 billion, while Pakistan would take a hit of $16.387 million to $4.95 billion. A shrinking social pie may well bring on more exclusionary policies in India, which holds the key to peace in South Asia, but it will not disconnect the region, nor change geography, nor the map of possibilities open to smart regional politics. ‘Connectographists’ like Parag Khanna in fact, suggest that supply chains will continue to integrate in Asia, irrespective of cold warriors like Pakistan and India’s disconnect. It will be a test of leadership for all, especially in New Delhi, that they use this crisis as an opportunity for a reset, or to plunge the region into further waves of cold war. After living through a shared history where the only war effort should have been a common (possibly-recurring) enemy, the pandemic experience could be the moment to radically re-shape regional futures.