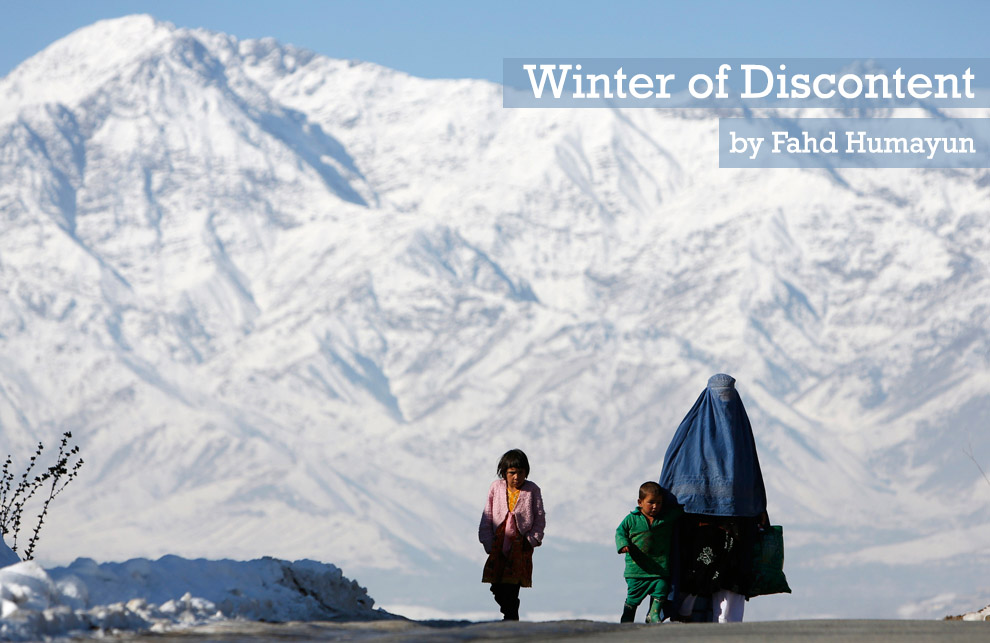 For President Ghani, it’s been a harsh winter, and one that has laid bare the key capacity deficits and constraints of an Afghan state on the defensive. As Afghanistan’s winter fighting season rolls into spring, a war cry is all that stands between an Afghan Taliban knuckling down for its annual Spring Offensive and March 21, the traditional start of the Afghan New Year.

Developments on the ground suggest that fighting, in some shape or form, will continue through 2016, or at least until Afghanistan’s defence capability develops the ground and aerial wherewithal to project itself as a credible deterrent. Despite a slow arduous buildup of air capability, a headless Ministry of Defence (MoD) and near-absent state control of non-urban centres is unlikely to dissuade the Afghan Taliban from its annual spring call-to-arms.

On the tailwinds of a hasty withdrawal from the strategic stronghold of Musa Qala – one the Afghan state had invested billions of dollars into fortifying – the ANDSF may well lose this Helmand to a protracted insurgency this season.

In Islamabad, the burning national security question is: why are Pakistan’s real and legitimate concerns about TTP command amassing in Afghanistan, under state and warlord patronage, constantly relegated to the lower rungs of the Quadrilateral Coordination Group’s priority list? And why is the burden-share of regional stability, if it can even be called that, repeatedly offloaded onto Islamabad’s doorstep? This is singularly unhelpful.

While Ambassador Zakhilwal’s latest admission that the Pakistani Taliban is based out of a part of Afghanistan over which the state has no jurisdiction is a sobering reminder of the limits of state capacity, the fact is that frankly nobody in Kabul or on Capitol Hill seems to be pushed about the Afghan state’s inability or unwillingness to seriously take on the TTP, even as Pakistani jawans fight a protracted inland counterinsurgency operation made all the more difficult by TTP sympathisers hunkering down in at least six confirmed Afghan provinces.

In Afghanistan, there is the added issue of how both sides – the National Unity Government in Kabul and the Afghan Taliban outside the city – presently frame the notion of a ceasefire. For the Taliban, a renunciation of violence will, at best, be a CBM that they will look to leverage for political concessions. For the NUG, a ceasefire is a necessary pre-condition for talks. What makes these two positions irreconcilable is the fact that since 2010 strategists in Kabul and Washington have arbitrarily legitimised the fight-talk approach, and so there is little reason why the Taliban should now see the two options as mutually exclusive.

A related problem has to do with numbers: as more players and splinter factions, including Hekmatyar’s Hizb-e-Islami, flock to join the process, the heterogeneity of Taliban participation will present peacemakers with a real problem. Since the size of the Afghan pie is unlikely to increase anytime soon, the number of claimants now vying for political representation will diminish the returns of political ‘buy-in’, therein reducing the incentives of joining the peace process. Moreover, the longer talks about talks drag on sans a realistic deadline, the greater are the chances that negotiations with the Taliban will be viewed as a ‘high-risk’ strategy by Kabul’s increasingly empowered anti-talks lobby.

Added to this is the bitter reality that the status quo really does suit the Afghan Taliban: with militants controlling more territory today than at any point since 2001, the group is comfortably placed to continue a guerrilla war of attrition for at least another year. This must spur an urgent CT rethink across the board. The next US president must already know that Operation Resolute Support’s troika of ‘train-advise-assist’ is not working. Insurgents, unlike the Afghan government, do not have to demonstrate an ability to hold land or territory in order to emphasise their writ; they simply have to demonstrate the other party’s inability to do so.

In the short-term, President Ghani’s fragile NUG will have to act fast. For starters, an intra-Taliban dialogue that discusses and debates the future of the insurgency will have to precede an intra-Afghan dialogue. The relationship between the Qatar office and Taliban battlefield command and control is still tenuous at best, as is the feedback loop between the Qatar office and the QCG.

Tayyab Agha’s replacement Abbas Stanekzai at the head of the Taliban Qatar office and Pir Syed Ahmad Gilani’s elevation to the helm of the presidentially appointed Afghan High Peace Council present an opportunity to rebrand both offices as credible negotiating conduits. But forging a consensus within the 70-member HPC will be easier said than done. The same applies to the Qatar office, which remains disembodied from militant cells in Afghanistan’s deep south, and cannot claim to speak on behalf of warring rebels.

One possible solution for Kabul, therefore, is to offer the Qatar office, and its representatives, safe passage to Afghanistan and a 30-day space to meet with splinter factions. As a baseline Stanekzai needs to know which groups he can speak for, and from there on evolve a baseline Taliban position. This offer of safe passage could be treated as a CBM by the Afghan government, and presented as such to the Taliban, with the aim of solving the problem of having to deal with a disunited franchise.

Furthermore, if the NUG can pre-empt the Taliban’s seasonal call-to-arms with a public announcement of a spring amnesty scheme for reconcilables, this can offset the strength of the Taliban’s pro-fight constituency. In terms of strategy, if two-thirds of the Afghan Taliban favour talks instead of war, the Afghan government will have a real shot at a ceasefire. But for this to happen, the battlefield tide will have to turn, with the Afghan Army switching gears, moving onto the offensive, and demonstrating greater counterinsurgency resourcefulness.

On the bilateral front, while Sartaj Aziz’s latest confessional on the whereabouts of sections of the Afghan Taliban leadership is telling of Pakistan’s increasing transparency as it breaks with past policies, intelligence sharing and overtures will have to be reciprocated by the Afghan side for this relationship to evolve. Kabul will also have to scale up ongoing operations, including those currently underway against Dand-e-Ghori insurgents in Baghlan, as well as against TTP militants sheltered by the Afghan state.

Until the Afghan state, together with the HPC, demonstrates greater capacity to bring pressure to bear on all Taliban insurgents, the current on-again off-again dynamic of negotiations is unlikely to change. Till that happens, the insurgency has both time and weather on its side.