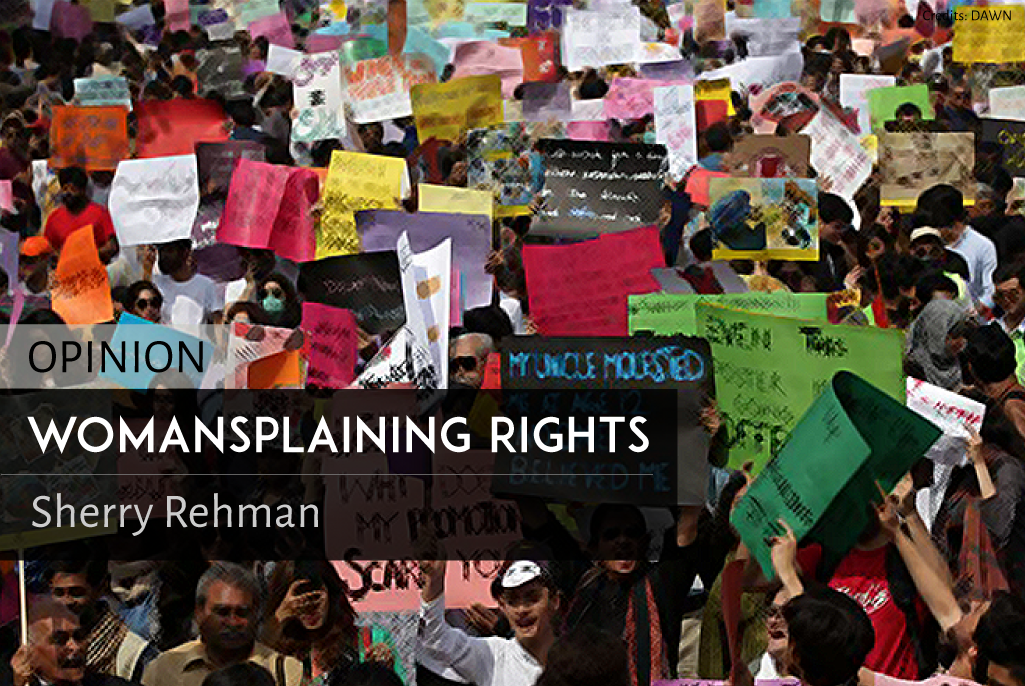 As millennial women join every year now to celebrate their womanhood on 8th March, and to bond in solidarity for defining the rights to their lives and choices, many people in Pakistan still actually ask, why women march?

This is not the only question. A great number of people, including influencers, still ask why women even want the right to their bodies, and more broadly, life choices. One of the most insidious derailers is invariably couched in class-sanctimoniousness. Why focus on body politics, don’t Pakistani women need basic social services, first they say, as if feminists don’t demand that. In doing so they ignore the diversity of women in these movements, or the fact that economically vulnerable women face a disproportionate impact of rights deprivations.

Obviously, the Aurat March slogan has cut such an open nerve across a wide class swathe that it has led to many stepping back in diffidence. Others have even apologized on social media for this “extreme” ask. I have a very clear view on this. Allow me to “womansplain”, not as someone talking down at men or even women, but as a woman who wants other women to be heard as much as myself.  Here’s why I think women need to talk even more about what they want and need.

Nothing substantive is ahistorical.  Nor in my view is any civil or human right gained from the comfort zone of perfect ideas or personal distance. To effect real change, especially to break down barriers of patriarchy or race, one has to have skin in the game, and give oneself the right to be radical. Because without radicalism, rights don’t fall into anyone’s lap, not in Pakistan, not anywhere in the world. In a world defined by gross inequalities, in fact, it’s a little amoral to not be radical.

Many of us have spent our adult lives explaining why we want rights over our own bodies, choices, careers, income, childbirth, identities, and lives. These are baseline asks. Worse still, we demand equality, and some even power. In this bruising quest, my generation was lucky to be led by big brave voices in what became a clear, identifiable women’s movement in the mid-1980s, which linked its goals to the restoration of democracy. Benazir Bhutto became the political face of the restoration for democracy while Asma Jahangir and other heroes created Women’s Action Forum, other groups, and the Human Rights Commission of Pakistan. Many legal and legislative battles were won, but only partially. Today, 35 years later, we and the younger women are still fighting the old battles while layering on new fights.

I recount all this because there are many reasons why women march, most of them structural, others political, while many are cultural. In Pakistan, just like anywhere in the world, the fight for women’s rights is a battle over power. Of course, the power to exercise one’s choices are limited by class and opportunity for men too, but for women, despite advances made, the limits on choices still make many old walls close in, while new predations lay their building blocks. Women march to knock these over.

One of these new walls being built on old ramparts of misogyny, is the discourse on women’s bodies, which has historically preoccupied many minds, both public and private. Instead of worrying about why a woman dies in childbirth every 20 minutes in Pakistan mostly because they are married off too young, many leading voices have expressed anxiety over why women want the right to their bodies and lives.  This fear of women gaining control over their bodies is very real. It permeates all social classes, not just the bottom of the rural social pyramid, but also urban elite enclaves.

Paradoxically, such multiple cross-class resistance has already marked Aurat Marchers as successful in one sense. When movements build momentum, they create intellectual, social and political debate amidst disruption, through which they also leave a mark. One mark is the discourse they create as well as the silence they break. The controversy over women’s right to choose their life-paths is a good point. It is out now in the light for its meaning to be stripped of false ideologues and moral gatekeeping. Another clear but intangible imprint over time is laid in precedents set, perceptions shifted, role-models created. For instance, the broad appeal of Aurat Marchers should make it safe, or politically correct, for many non-activist women in taking their moral solidarity to the street. For many of them the personal has not become the actively political, yet they are able to join in to show support. Another success of this second-wave feminist momentum is that it has for now, created boundaries against impunity for abuse on public platforms. Because of support energized by the Aurat March, media opinion-shapers, celebrities, politicians and tv anchors have started pushing for women-haters to be called out, as exemplified in the Marvi Sirmed vs Rehman face-off. Whatever the online trolls may say in their hate play, on balance, her win was a win for women everywhere.

Yet no fight in the battleground for women’s rights in Pakistan is ever free of assaults, and revisions occur like sunset every day. Women’s access to healthcare and literacy, equal pay and uncounted hidden work are the long arc of the fight. The manifesto of change is long and inclusive. However, the political debate on “my body, my right” has sparked so much heat on public platforms, from parliament to television, that women at all levels are repeatedly still called out for seeking rights over their bodies as either absurd, or wanton, or both.

Many sympathizers also suggest that the Urdu framing of the words “mera jism, meri marzi” from “my body, my right” is provocative, has shifted focus from the gist of a fairly fundamental ask. Right or wrong, the quibble is not reason to imply that it is anchored in moral laxity. Quite the opposite, from what one sees in the manifesto. Women are marching for all sorts of rights, including the right not to be honour killed, or assaulted at home, or harassed anywhere. Not distance people from what women are marching for. In fact, let me say there’s a fairly “mainstream” argument to be made here. To seek such a right in Pakistan, and space for others to seek more, one can appropriate the appeal to human rights, Jinnah’s words, the Constitution and the kitchen sink, as much as one can find its justification in religion.

Again, the questions we need to frame such a slogan in are fairly fundamental and really should give rise to introspection about our collective failures. According to UN data, 48.1 % of Pakistani women have no say in their health decisions. These may be failures of the state, but that is not the point. Who should have control over an adult woman’s right to marry, give birth, have a say in her health decisions? A man, because he has power? I don’t think so. This is Pakistan, where some of the best stories are its women, and this is the 21st century. Does our culture really want to condone acid crimes when a woman spurns a suitor? Do women not have a right to plan their childbirths, or are we still supposed to be chattel? Do women not have a right to speak out against rape and sexual harassment? Why must women who march be accused in court petitions of an agenda that spreads anarchy, vulgarity and hate?

Pakistan has made laws against such practices. So do detractors realize that when they obstruct the right to choose autonomy over women’s bodies, they are tacitly espousing the right to violence against women? Statistically, home is still the most dangerous place for a woman in Pakistan. That is where much of the violence originates, as well as most “honour crimes”. As for choice, does Islam not ask for witnesses at a woman’s marriage to protect her right to choose, and specify agreement three times, in case she’s being coerced? So, what is exactly wrong with marching for such rights? Frankly, nothing. This is all about power moving beneath our feet, nothing more, nothing less.

Every incipient movement has a beginning, a plateau and a reckoning with history. This one is young, full of hope, and To Be Continued. Along the way it must grow its base, create inter-generational links, invest in time-lined strategy. It must build networks across institutional champions, political parties and governments in order to translate some of its demands into tangible, realizable goals. These will have to be addressed, created over time, and culturally buttressed. It will take tenacity, courage and a few good women and men. Right now, we have thousands.