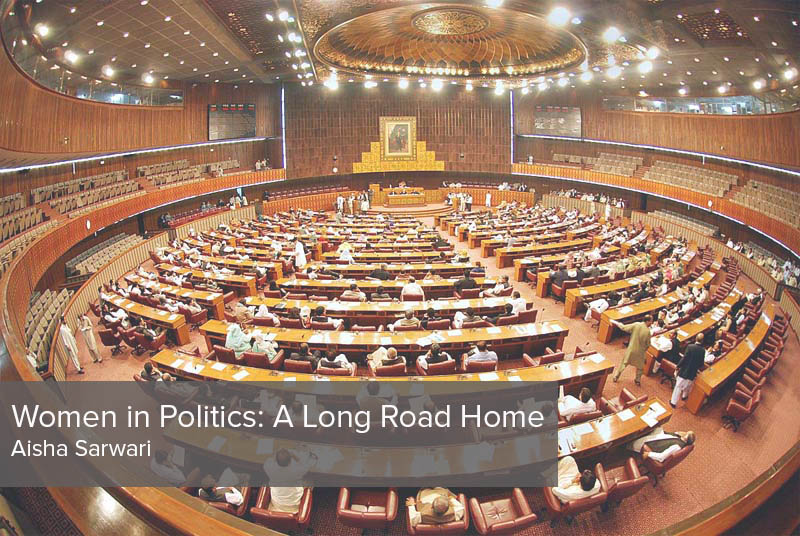 When a woman in Pakistan enters politics it is as though she has consciously decided to walk onto a minefield. Despite women parliamentarians enacting affirmative pro-women legislation and leading their male colleagues in contributions to parliamentary debate, far too many continue to face a media riot defaming them for transgressing any one of the unwritten codes of patriarchy entrenched within the system. Most Pakistani women in politics have been body-shamed, name-called and character-assassinated at least once in their careers, some routinely.

Nearly 21 per cent of members of parliament in Pakistan are women, compared to 12 per cent in India and 19 per cent in the United States. While some truly spirited women in politics have made their way to parliament through reserved seats, the majority are viewed as proxies for their male political family members. Even more troubling is the fact that this majority is securely representative of pervasive elitism. Women have also been unconstitutionally ousted from their seats by jirgas for being estranged with their husbands, under the public perception that the social clout of their male counterparts assisted in their successful election in the first place. During the last elections, for example, some political parties went as far as to exclude women from casting their vote in Lower Dir. Unfortunately, equality for women in politics is on the backbench of almost every political party’s agenda, let alone the religious right. Despite these obstacles, however, reports indicate that the performance of women legislators in parliament and provincial assemblies over the last decade have surpassed those of their male counterparts nation-wide.

The way women are treated in politics is deterrent enough for new women lawmakers to enter the field. They are routinely undermined by men, and if they speak out against it, gendered privilege allows these men to frighten them into silent corners. Those women lawmakers that step up and take on a media war against sexual harassment in politics face a vitriolic witch hunt both within their party and outside. It is common to witness a backlash against women parliamentarians across party and gender lines regardless of whether or not any harassment allegations are proven. It seems that women in politics must adopt a position of silence in order to be considered ‘honourable’ or worthy of respect.

Sadly, the irony is that women also face harassment by other women parliamentarians who themselves have been routinely victimized by sexism. Women across parties have been known to undermine those who come out with an accusation by associating it to blind ambition. Internalized misogyny it seems, not just plain old patriarchy, is the bane of women’s limited involvement in politics.

It doesn’t end there. Women also tend to get stonewalled when pushing ahead for legislative changes. Male lawmakers block their lobbying and consequently take away their decision-making mechanisms. This is why laws on maternity benefit, anti-acid-throwing, anti-violence and anti-harassment have stalled as much as they have – each step as difficult as trying to feed pine nuts to a hamster on a wheel. The system, a men’s club in reality, pushes women far away from the sphere of influence. Male parliamentarians have repeatedly used grossly derogatory language against women parliamentarians. Currently, within the party, leadership reacts by giving such men more political accolades.

In the first general elections of 1970 in what is now present-day Pakistan, 77.8 voters were women compared with 100 men. Their ratio of participation in elections held almost half a century later slipped to 77.4. City to tehsil, it never diminishes. Equality of women in politics is a slogan, not a belief and women are therefore seen as an extension of male politicians.

The debate on women’s participation in politics in Pakistan has largely remained confined to reserving women’s seats, but the real issue is the lack of a level playing field, where intersectional women can step out and compete on their own terms. Ideally, with credentials that are not necessarily linked to a male guardian, nor propped up with campaign wealth. That is when real change will happen.

This cannot take place until the women who have found their way to parliamentary seats are first treated with the respect and authority they deserve. Their decisions must carry weight, and when they are wronged, there should be swift action against proven perpetrators. This will pave the way for others and will ultimately bring solidarity among women themselves.