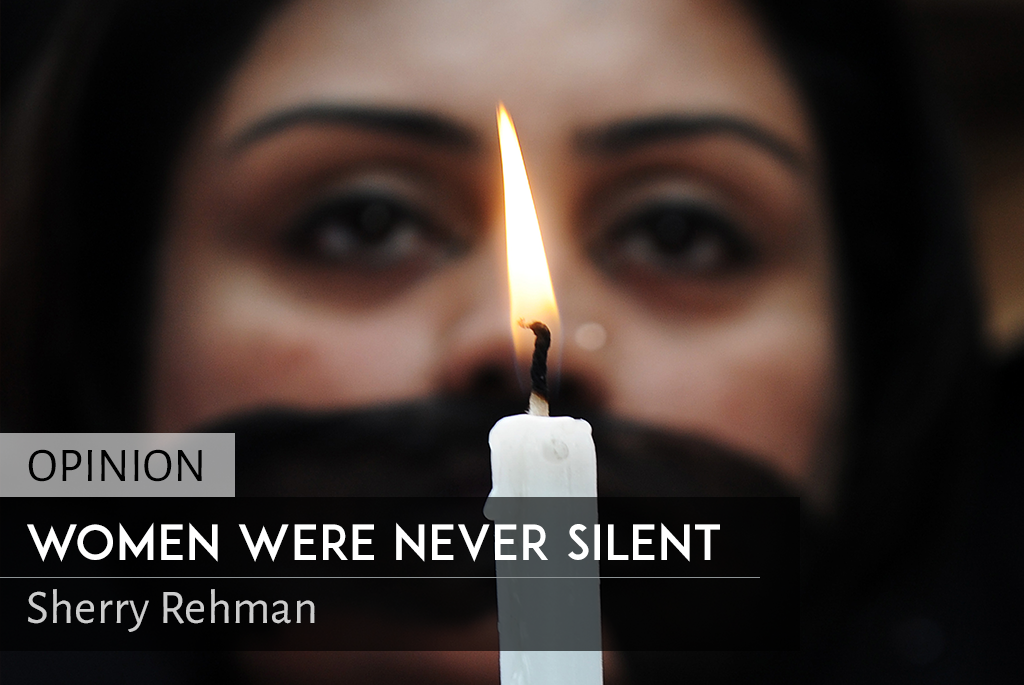 Every country’s story is incomplete without its women’s voices. Pakistan is no different.

On International Women’s Day we should always take stock of the good, the bad, and of course the ugliness that holds women back in the dark. For a country where 48.8 percent of the population are women, Pakistan ranks 143 out of 144 countries in the gender parity index. 13 million out of the 25 million children who are out of school are girls, making us second in the world with the highest number of out of school girls. Women still get paid 23 percent less than men and hold only three percent of the managerial positions. 25 percent of reported honour killings in the world happen in Pakistan. These are just some of the grim numbers that define women’s lives in Pakistan.

Yet, in the face of such stark dispossession, despite the extreme vulnerability, Pakistan’s women continue to be a source of hope and pride to their country. How? Because Pakistani women were never silent. For a long time they were just not heard. The surge in earlier movements and current campaigns for diversity, inclusion and equal rights across the world has given us an opportunity to step back and celebrate the progress that we have made and allow us to encourage more women to reclaim their space and power.

We are witnessing a powerful shift globally, and this time Pakistan is no longer playing catch-up. Pakistani women are slowly but surely shedding their fear of speaking truth to power. Our big and small victories were not made in a vacuum. Hope blazed eternal in the lives and struggle of iconic women like Shaheed Mohtarma Benazir Bhutto, who as twice elected prime minister of a Muslim country for the first time, stood in a league of her own.

She firmly believed that having women in the corridors of power will strengthen any country’s democracy. Her legacy lives on through the example she set and the generation of young women she inspired to fight for their place and their rights

In civil society too, a whole edifice of resistance was built by women, for women, by an entire generation of campaigners from the days of General Ziaul Haq to today. Asma Jahangir stands tall in that gallery of our greats. These mostly urban women fought for the plight of women who were and are victims of abuse and inequality, as both challenges remain pervasive in Pakistan.

There is still more to do in terms of framing narratives and changing mindsets. Yet despite the onerous conditions, Pakistani women have been dominating the news cycle in the past decade for all the right reasons. Slowly, more girls are going to school and even outperforming boys, excelling in sports, bringing home accolades from the Nobel Peace Prize to the Academy Awards and are joining politics.

It is crucial that space and opportunity are created for women taking their power, whatever work they do. More young girls in this generation are still unaware of their rights and the possibilities that can remove limits to their power. Young Krishna Kumari’s election to the Senate of Pakistan is a huge testament to the progress Benazir Bhutto’s PPP has worked so hard to achieve. Her addition to Pakistan’s parliament by the progressive Bilawal Bhutto Zardari’s leadership has blazed a new path forward for girls from marginalised communities. When this newly empowered Hindu woman takes oath in the Parliament a few days from today, her journey itself will signal new opportunities for every young girl in Pakistan who dreams of breaking barriers and aiming higher.

The path forward for women in Pakistan, and many parts of the world is strewn with minefields. We have to work very hard at different levels to navigate the road to empowerment and equality of opportunity. There will always be heartbreaking reversals, but moving past them are crucial for a society to reinvent itself and build resilience. Women are still being judged solely on the virtue of being a woman and this is not a problem exclusive to Pakistan.

Women have always had to seize the space needed to exercise their options. The women’s movement, in different levels of momentum, is a product of women taking their power fraction by fraction. What matters at this point is that all of us, not just those in power and positions of privilege, are encouraged to move the line forward. That is how social transformation and growth takes place. Now is the time to speak up, resist, disrupt, and break the false glass ceiling.