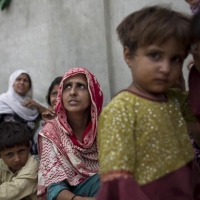 The monsoon floods that hit Pakistan in July 2010 killed 1,752 people and affected nearly 18.1 million across the length of the country. Many of the deaths were reported in the North, in Gilgit-Baltistan and Khyber-Pakhtunkhwa, where torrential floods destroyed bridges and infrastructure. However, it was the low-lying areas on Sindh and parts of Baluchistan that bore the brunt of inundation towards the peak of the floods. In September, the Sindh government reported about 1 million people displaced and living in relief camps across the province. The world came face to face with the extreme poverty in the rural areas of these provinces as thousands of children and women filled medical camps, and chronic conditions such as malnourishment and scabies were exacerbated by the floods. It was estimated that 12,000 children became acutely malnourished in the aftermath of the floods. The UN reported in September that 15% of the affected population comprised of children under the age of five, while 8% were pregnant and lactating women who require urgent nutrition support. Respiratory diseases, skin diseases and acute diarrhea were commonly reported; and providing adequate drinking water and sanitation facilities to the displaced population became a major challenge for relief agencies.

A variety of private, non-profit and government agencies were involved in the relief and rehabilitation efforts soon after the floods. The Government of Pakistan’s National Disaster Management Authority and the United Nations’ Office for Coordination of Humanitarian Affairs in Islamabad were responsible for coordinating relief efforts with the hundreds of local partners who came forward to distribute emergency supplies and relief goods. The coordination efforts were hampered by the magnitude of the flood, and the variety of social, economic and political institutions that were swept away under its onslaught. In some districts, particularly in the north, provincial and district governments had maintained updated population records which facilitated the recovery process; in Sindh, on the other hand, district governments were often ill-equipped to provide relief organizations with basic demographic information. Coordinating relief disbursement across hundreds of local NGOs and tracking aid efficacy and transparency would prove to be the biggest challenge for the government and its international partners.

The most immediate crisis in the flood disaster was providing cooked food and shelter to millions of displaced families. In September, the UN estimated 10 million people in KPK, Punjab, Balochistan and Sindh in need immediate food assistance. Various local and international relief agencies were successful in providing some 7.5 million people with food assistance in over 60 affected districts. In November 2010, over 75,000 metric tons of food was distributed to 5.7 million people across Pakistan through the World Food Program. The WFP plans to gradually reduce the amount of food aid over a six-month period; 6.1 million people will be provided with food during the December-January period and thereafter recipient numbers will reduce to 4.2 million in February and to 2.1 million by July 2011.

Out of the 18.1 million people affected by the floods, the National Disaster Management Authority identified 1.5 million to receive cash-transfer ATM cards that would provide a first tranche of Rs.20,000 (about $233) to each selected individual, and subsequent tranches of up to Rs.100,000.  As of December 21st, NDMA reported that 1.3 million cards and approximately Rs.25 bn disbursed. In spite of promises of future tranches, newspapers reported in November that many people were selling their Watan cards for anywhere between Rs.30,000 to Rs.50,000.  While some instances of mismanagement were reported (the NDMA set up a complaints cell for beneficiaries), many instance of successful disbursement were reported as well. Without a full assessment it is difficult to judge how effective these cash transfers have been, however, the Watan card scheme proves that existing infrastructure in rural areas (such as the successful mobile banking model) can be used to facilitate reconstruction and rehabilitation processes.

As of 28th December 2010, the UN Office for Coordination of Humanitarian Affairs (UNOCHA) reports that 51% of Pakistan’s total humanitarian aid requirements have been contributed or committed by various donors. Amongst the most poorly-funded sectors are Camp coordination and management, at 8%, Education, at 9 %, Shelter and non-food items at 20% and WASH (Water, Sanitation and Hygiene) at 29%. These figures were updated to show a revised need of 1.9bn US dollars, against a commitment of $979 million. Nearly all of the ask amount has been committed through bilateral aid but it is evident that about half of it has yet to come through. For example, while UNOCHA reports $651 million currently committed by the United States’ development agency, USAID’s own figures report that over $203 million will be disbursed in the next fiscal year.

The UNHCR reports approximately 128,000 people who remain displaced across 234 relief camps in Sindh. A majority of the affected population in Sindh (upto 88%) have returned to their homes. At the height of the floods more than 1 million people were living in camps in Sindh. These figures do not include spontaneous camps set up near towns and villages – what are termed “secondary displacement sites” by the UN agency. According to the Camp Coordination and Camp Management Cluster, many of Sindh’s secondary displacement sites will remain active throughout the winter months.

Current status: looking towards agricultural outputs, and weathering the winter

At the end of 2010, a full five months after the first banks burst in the north of Pakistan, some 421,000 hectares of land east of the Indus River in the south remain underwater. Assessments indicate that while soil fertility has increased in the north, farmers may be using inadequate amounts of fertilizer and have not repaired damaged canals and waterways. Agriculture experts are expecting a large degree of variation in the Spring wheat crop. To assist farmers in meeting the sowing deadline this year, the FAO distributed seeds and fertilizer to 0.4 million targeted households in KP, Baluchistan and Punjab. Additionally, cash-for-work programs are being initiated to facilitate the rehabilitation of irrigation infrastructure.

With the onset of winter, it is evident that millions of families remain without homes and shelter. For one thing, thousands of IDPs still living in makeshift shelters in Sindh will likely spend the cold months outdoors. As of December 21, only 47% of the 1.7 million families estimated to have severely damaged or destroyed homes had been provided with makeshift shelter. The USAID’s December 28th report states the priorities for the Shelter Cluster team are to provide emergency shelter to families in need of immediate assistance, transitional shelter to families unable to return home and one-room facilities for people who have returned to destroyed or severely damaged homes. The Shelter Cluster plans to build more than 85,000 early recovery structures in the coming months. Additionally, about a million blankets have been distributed countrywide by the IOM, in anticipation of the winter months.